BENEDICT TEMBO, Sioma
JEANETTE de Villiers has seen an increase in business and infrastructure since Sioma was declared a district nine years ago.
Sioma, a town on the west bank of the Zambezi River, was created in 2012 by then President Michael Sata by splitting Shangombo district.
Ms de Villiers, who is a lodge operator, says the construction of the bridge across the Zambezi River linking Sioma on the west bank to Senanga and Sesheke has been the game changer.
“The bridge is invaluable as Mongu, our main supply town, is now accessible, not to speak of all the lives spared from crossing the river, either with mokoro (wooden boat used by locals to cross the river and for fishing) or pontoon,” says Ms de Villiers, who runs Whispering Sands, a lodge on the fringes of the Zambezi River, with her husband. 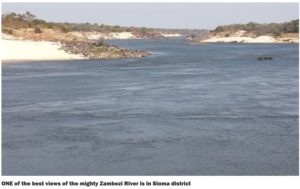 Since arriving in Zambia four and a half years ago, she has seen more businesses, especially shops along the main road leading into Sioma, spring up, and health facilities built.
Crossing the Zambezi River prior to the construction of the bridge was very risky.
Whispering Sands lost a security guard after the mokoro he travelled on capsized.
In 2016, lives were lost when the pontoon got marooned and people had to be rescued. This was the second time a pontoon got stranded on Zambezi River.
Council secretary Christopher Siasinyanga says apart from the reduced water accidents as a result of the construction of the bridge, the other major benefit from the bridge is the seamless movement of people and motorists at any time for CLICK TO READ MORE

12th Parliament: What went down – Part 4