THELMA BWALYA, Lusaka
SINGER Salma Sky, who released her debut album last year, has released a single titled Free featuring LJ Mojo.
The song was released with the video which premiered on Trace Urban a fortnight ago. The video was directed by Tivo.
Salma said the song is about her bearing the deepest struggle of what creativity feels like when it is boxed and stifled by the industry.
She said it was just inspired by the authentic conversations she has had with herself about how she copes as an artiste in the industry versus the adversity that comes with it.
Salma said it is not her desire for any artist to feel the way she has felt before, which is boxed, misunderstood and inhibited from making the music that one truly loves. 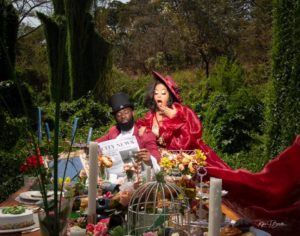 “Free is an expression of artistic liberation,” she said. “It is me bearing the deepest struggles of what creativity feels like when it’s boxed and stifled by the industry or expectations from supporters that don’t align with my constant evolution as an artiste.
“I felt the need to speak for myself and those that feel like I do and being in the industry as long as I have, I felt the need to champion the creativity liberation of artistes for those coming up now because Zambian music requires diversity and the ability to embrace all genres of music and all types of artistes regardless of their creativity output.
“I don’t want even one artiste to feel the way I have before; boxed, misunderstood and inhibited from making the music they truly love and authentically matches their person and brand.”
During the premiere of the music video, Salma said she was finally free to start a new decade of her career as she has been in the music industry for 11 years now.
“I’m finally free, free to start a new decade in my career,” she said. “I celebrated my first decade because it was a great journey for me, I learned so much in my first 10 years and I’m finally becoming the Salma Sky that I have always been destined to be.
“So, Free was a very important message for me to put out before I release what is going to be the most beautiful body of work I’ve ever created and I’m so proud of it and I can’t wait to share it with all of you.”
Salma said she is currently promoting the song as well as creating visual masterpieces that will go alongside the music, which already has so much presence.
“I’m excited to share with you during the course of November,” she said. “I think the most important message I would like to give my fans right now is that we are all constantly changing and so whoever your favourite artiste is, remember to be open minded to growing with them.
“When times change, we must remember that there’s a season for the shift and we should try and soak up creatives for who they are in that time and space. Keep supporting our brands and keep supporting local artistes no matter the genre. We need you behind us to take Zambia to the world.”