LINDA NYONDO, Lusaka
SHE is now able to differentiate between a girl and a boy when teaching, something she found difficult during her first day in class in 1974 when she first came to work in Zambia as a Holy Cross Sister. 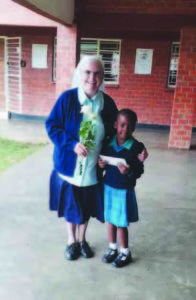 Sr Rita Brennan’s failure to differentiate between a boy and a girl when pupils were seated in class during her first days of being a teacher at Holy Cross Convent in Livingstone was because of the uniform short hair style the children had.
Her first posting as a Catholic Missionary teacher to Zambia was at the Holy Cross Convent School in Livingstone where she taught pupils in Grade Three, some of whom have still kept contact with her to date.
She was later posted to teach at Hillcrest Technical School in Livingstone, where she was asked to establish a religious education department, which she successfully did, after which she was transferred to Mongu to continue her work as a teacher.
With 46 years of experience as a missionary teacher/ educator in Zambia, Sr Rita is now managing Holy Cross Convent School in Lusaka, one of the few Catholic schools promoting co-education of children from a young age in the country.
“Teaching is one of those professions where we Holy Cross Sisters deal with a whole person. It has to be all-inclusive. We do not only focus on giving children an education, we also nurture them into good responsible citizens,” she says.
Inspired by the first Catholic nun, Saint Brigid, who abdicated her title as a princess in Ireland, Sr Rita, in response to God’s call, emulated her by offering herself as a teacher and a spiritual leader in Zambia as a Holy Cross Sister.
In her 46 years of work as a missionary teacher in Zambia, Sr Rita has continued the missionary spirit of Sr Brigid. Sr Rita has, over the years, been in Zambia, mentored many young girls and boys into becoming responsible and productive adults.
Offering lessons to the children, counselling them and linking those who struggle with finances to people and organisations that can help them are some of the services she offers.
She has pledged to continue her missionary work in Zambia in remembrance of her mentor, Sr Brigid, the first Irish nun who, according to traditional belief, was the first Catholic nun in Ireland in the 5th century.
To honour Sr Brigid’s servitude as a Catholic nun, the Republic of Ireland has set February 1 to celebrate her.
Sr Bridid’s Day has become the Irish department of foreign affairs’ annual celebration of creativity and achievements of Irish women.
Unlike her mentor, Sr Brigid, who was born and did her service to the communities in Ireland, Sir Rita’s stay in Zambia has brought new meaning because she serves people of a different nationality.
Being a teacher has exposed her to dealing with many other personal issues affecting pupils such as child marriages, drug and substance abuse and mentoring children and young adults to take up leadership roles.
“Our focus as agents of education is to help young people grow up into responsible adults who value the extended family system and value interaction with other people other than their immediate families. To care for the less privileged in society,” she says.
From time to time, Sr Rita and her colleagues incorporate young people in their outreach programmes where they donate foodstuffs and other items to orphanages and other facilities housing vulnerable people.
The first Irish sisters who came to Livingstone and Western Province in 1936 worked to prevent child marriages, which are still prevalent in Zambia.
Over the years, young girls have been married off, depriving them of their right to education and a bright future.
“Having boys and girls together in one class creates healthy competition among them,” she says.
The sisters encourage the learners to have respect for each other from a young age and they see co-education as a way of promoting gender equality in future.
Sr Rita is accustomed to the Zambian traditions, cultural practices, beliefs and societal norms, all thanks to the Catholic Holy Cross Sisters who were deployed to work in Zambia earlier than her.
She praised the older Sisters she lived with for sharing their wisdom and experience with her.
She has also been able to learn a lot from the local people about Zambia and the way of life of the people through interaction and teamwork both in the school and in the parish.
Her long stay in Zambia has also contributed to her appreciating many aspects of the way of life of locals and the value attached to their culture and tradition.
“One of the challenging problems the Zambian society is facing is broken families. Unstable families have greatly contributed to the increase in the number of children who are insecure,” Sr Rita says.
She has also been involved in programmes that are aimed at empowering vulnerable families because she believes that the financial instability of a family greatly contributes to challenges that children face.
Sr Rita has been involved in mentorship programmes aimed at helping young people and their families find solutions to their daily struggles.
“I have established very good friendships with many children, and they are able to open up to me and tell me about the difficulties and challenges they face,” she says.
Becoming a nun is a decision she does not regret because it helps her in her service to God and people.
She has also been able to reach out to people and contribute towards reduction of poverty and other vulnerabilities in communities.
Sr Rita does this through the medium of education which encompasses skills training, development and professional training. She strongly believes that the cycle of poverty is broken by ‘education’.