MWAPE MWENYA, Lusaka
For midwife Lillian Kanyanga, delivering a pregnant mother and seeing a bouncy baby coming into the world is her greatest delight.
One of Ms Kanyanga’s lowest moments in life is when something goes wrong in the labour ward and the life of either a mother or infant is lost.
This is one midwife who has worked at Luwi Mission Hospital in Mwinilunga District for about eight years and relives her experience of working in the labour ward in the night without electricity. 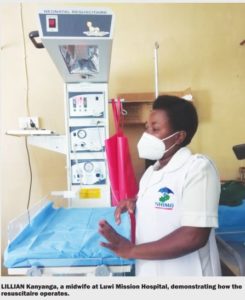 “I enjoy helping expectant women bring their babies into the world safely. And that is the reason I love my job,” Ms Kanyanga says in an interview.
Although, she is passionate about her job, executing her duties in the past eight years has not been an easy undertaking due to lack of electricity at the hospital.
Ms Kanyanga recalls how before her hospital was electrically powered, she had to use a torch to illuminate the labour ward in the night.
She normally does two to five deliveries in a day.
“It was difficult working especially during the night when I would have more than two deliveries. The torch would eventually go off and I would resort to using the torch on my phone,” she narrates.
However, the story of Luwi Mission Hospital has changed, thanks to Rural Electrification Authority (REA) for powering a part of Mwinilunga that caters for the health facility, schools and grocery stores.
“I wanted to leave (the hospital) because I got tired of working in such an environment. At first, I used to use torches when delivering. If I did not have ( spare batteries for the touch), I would use my phones because this labour room gets very dark at night,” Ms Kanyanga shares.
She says some of the infants she had delivered did not survive because previously, the incubator was not functioning due to lack of electricity.
“We have a resuscitaire which we never used because of lack of power. When babies are born prematurely, they need it to survive,” she said.
The situation has changed for the better. This is because Luwi Mission Hospital is one of the first institutions to benefit from the recently-installed 640 kilowatts mini-hydro power station in Kasanjiku area by CLICK TO READ MORE