VICTOR KALALANDA, Lusaka
IN THE least expected move, President Edgar Lungu yesterday unveiled scientist-cum politician Nkandu Luo, 69, as his presidential running mate, with this clearance: “I know some of you fear her because she is too strong, too forthright and too intelligent, but that’s why I went for her anyway.”
This discharged political tension that had been building up in the country, re-positioning the President as a smart politician because widespread speculations in favour of probable candidates like former NDC leader Chishimba Kambwili and among others, Given Lubinda, the outgoing Kabwata lawmaker, were finally proved false.
But with the PF presidential running mate position having been filled up by Prof Luo, what has since arisen are the overarching questions, who is she and does she have what it takes to perform her new role effectively and to PF advantage? 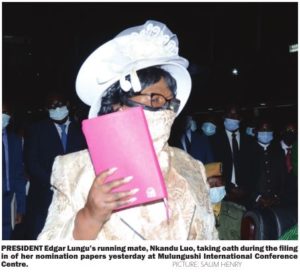 Born on December 21, 1951 at Lubwa Mission Hospital in Chinsali, Prof Luo was raised by teacher parents.
After attending Roma Girls Secondary School and Dominican Convent, the young Luo went on to pursue a master of science degree in microbiology at Moscow State University in Russia, and later obtained the master of science and doctorate degrees in immunology from Brunei University in London.
Having obtained this education and following her professional stint at Saint Mary’s Hospital in London, Prof Luo returned to Zambia and launched her historic career at the University of Zambia (UNZA), where in 1993 she became the first indigenous female Zambian to attain the rank of professor in microbiology and immunology.
Collaborating on research projects with now globally distinguished scholar Prof Alimuddin Zumla and late top UNZA scientists Prof Sridutt Baboo and Chifumbe Chintu, Prof Luo went on to serve as Head of Pathology and Microbiology at the University Teaching Hospitals (UTH).
At this stage, she had risen to national stature as a trailblazing academic icon who had also done extensive research on HIV and AIDS.
In 1996, Luo accomplished her first political feat when she was elected Member of Parliament for Mandevu Constituency on CLICK TO READ MORE

Can Dan Pule bounce back?

12th Parliament: What went down – Part 4
Farming project to change livelihoods in West