Children’s Corner with PANIC CHILUFYA
Dear Mrs Chilufya,
I am writing in response to your article in the Zambia Daily Mail of October 24, 2018, where you tried to clarify issues pertaining to passing the Zambia Institute of Advanced Legal Education (ZIALE) examination.
However, my worry is that nobody from ZIALE, Law Association of Zambia (LAZ) or other members of the legal fraternity has clearly explained to the nation what it entails to pass the Zambian Bar exams. My little understanding is based on the experience I got during a stint I had at the then Legal Aid Department from 1969-1973 and when my daughter went through the grill some five years ago. I will take the 378 or 380 pupils who are said to have failed the 2018 ZIALE examination; the truth is that they did not actually fail as such:
• ZIALE has ten (10) subjects, which are all compulsory for one to pass before they are admitted to the Zambian Bar.
• If a student fails even one subject, they cannot be allowed to proceed for admittance until they clear that particular subject.
The truth therefore is that each one of those students who did not make it to the Bar from the 2018 Class did not fail, but passed the majority of the subjects, only that they did not clear some courses. The subjects they passed are still credited to them and they will only be allowed to proceed to the Bar upon clearing those subjects.
This requirement has been standing since the days of the Law Practice Institute (LPI) in the late 1960s as ZIALE was known then; I know of some prominent lawyers, including judges, who did not clear at first attempt and had to re-write.
What people should know is that poorly qualified lawyers are a cost that is passed on to the clients and the country’s legal system as a whole; it is like forcing a poorly qualified surgeon to undertake an operation; the result is not only disastrous but dangerous on a patient.
An ill-qualified lawyer will not adequately represent a client to the extent that the client will suffer a serious miscarriage of justice. Zambia today needs more qualified legal brains to deal with the issues surrounding the economy, the Constitution, social challenges and environmental issues; the weaknesses we are seeing in these areas are not only political inadequacies but largely due to the malfunctioning of the legal system which is not able to adequately inform the political system, hence the country is externally and internally exploited by forces that take advantage of legal weaknesses.
So I would say “lekeni abana bafundwe pakuti bengile mucupo na menso aya isuka”. “Kutokwa zibo ya mulawo, kibubofu bobuziyeza naha”; “mwamuna wamene alibe phunzilo lapa mphala ni wakhungu”.
Those who have taken the legal training path are aware of these implications, so give learners a chance to do the right thing so that high standards can be maintained within the legal profession.
My daughter, whom I earlier alluded to, did not clear three subjects on her first attempt; in the second attempt she cleared 2 out of the 3; she only proceeded to the Bar upon clearing her remaining subject. Today she is a brilliant practising lawyer, who I as a father I am very proud of.
Not that we did not see any tears, but as a family we gave her counsel and encouragement. Many others have also passed through this process. There are always few who clear the 10 subjects at first attempt. I can assure the nation that there is no deliberate ploy by those already in the legal practice to limit the numbers of those getting into legal practice; in fact, they are the first to admit that the country does not have sufficient numbers of lawyers to service the country’s legal needs.
Finally, let us not be unnecessarily emotional, “Cheap is expensive”. Other professions are suffering because anybody can cheaply get the practising qualification and we are seeing the poor quality of their service delivery.
I urge those 380 who did not clear this time to soldier on, soon and very soon they, with determination, encouragement and hard work, will also make it.
May I also join in congratulating the four lawyers who will be called to the Bar soon.
STEPHEN CORNELIUS MTONGO
Kabwe
Dear Mr Mtongo.
Thank you for feedback and your detailed explanation.
Remember, children are our future, until next week, take care.
For comments: pcmalawochilufya@yahoo.com 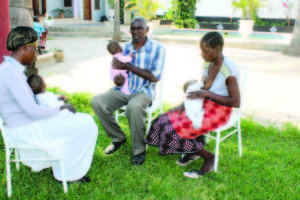