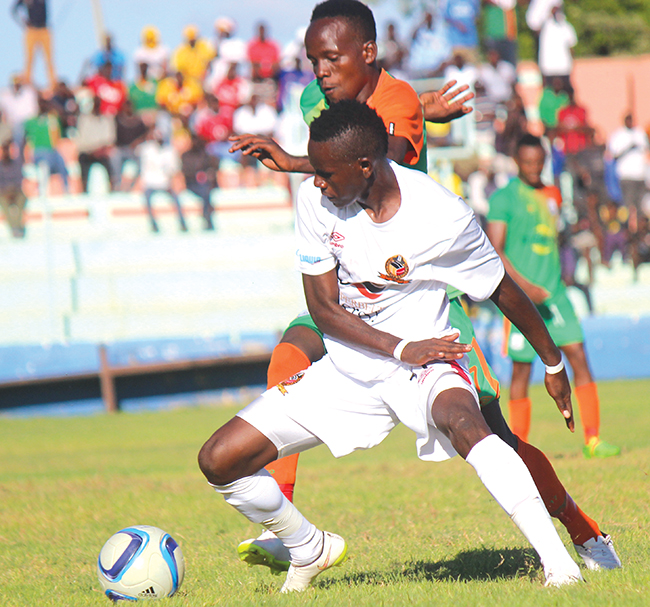 STEPHEN PHIRI, Nkoloma Stadium, Lusaka
ZESCO 1 (2) POWER 1 (4)
AFRICA inter-club representatives Zesco United and Zanaco were yesterday booted out of the Samuel â€˜Zoomâ€™ Ndhlovu Charity Shield after losing to Power Dynamos and Green Buffaloes, respectively.
Zesco, the CAF Champions League envoys, lost 4-2 on penalties after battling to a 1-1 draw in regulation time in the semi-final clash while Confederation Cup representatives Zanaco went down 1-0 to Green Buffaloes in a double header watched by a capacity crowd.
Power were on target through Kelvin Mubanga, Govenda Simwala, Julius Situmbeko and former international defender Francis Kasonde while Larry Bwalya ballooned his shot over the cross-bar.
Ivorian Ben Adama Banh and Nigerian Ayo Aluwafemi hit the net for Zesco while Idris Mbombo and Misheck Chaila failed to convert in a match watched by MMD president Nevers Mumba.
With five minutes remaining, teenager Conlyde Luchanga restored parity for Power with a gem of a goal.
Luchanga beat Banh and unleashed a cracker beyond the reach of goalkeeper Jacob Banda.
Power started the match on a fast pace with striker Martin Phiri forcing Banda to save his close-range shot a minute into the game.
Four minutes later, Power custodian Joshua Titima parried Dauti Musekwaâ€™s shot for a corner before Jackson Mwanza blasted his shot over the bar in the 15th minute after a counter-attack.
Mbombo beat the offside trap but Titima blocked his shot in the 28th minute.
On the other side, Banda stopped Patson Dakaâ€™s close-range shot for the first half to end goalless.
Zesco started the second half on a high with enterprising Mwape Mwelwa outdoing Power in the midfield.
Referee Wellington Kaoma ruled offside Jackson Mwanzaâ€™s goal in the 50th minute.
Five minutes later, Mwape combined with Cletus Chama and the latter placed the ball to Mbombo.
The Congolese forward shielded Kasonde and blasted from a tight angle with his left beating Titima.
Power coach Tenant Chilumba introduced Situmbeko for ineffective Daka in the 61st minute while his counterpart, George Lwandamina, unleashed Lazarus Kambole and John Chingâ€™andu for Mwanza and Mwelwa, respectively.
Not satisfied with the proceeding, Chilumba withdrew Phiri for veteran Emmanuel Chimpinde while Zesco introduced Simon Silwimba for Kenyan Anthony Akumu Agay.
Chingâ€™andu could have sealed victory in the 81st minute but he shot straight at Titima.
Luchanga rose to the occasion in the 85th minute for the match to be decided on penalties.
â€œWe could have buried the game in the first half with a little effort because we had all the chances. Sometimes when you have a crucial game ahead, players tend to relax,â€ said Lwandamina referring to Fridayâ€™s CAF Champions League preliminary round return leg against Al Ghazala Wau of South Sudan.
Power coach Chilumba said, â€œWe are happy to beat Zesco. We didnâ€™t beat them last year and now our objective is to win the Charity Shield.â€
Zesco beat Power three times last year.
ZANACO 0 BUFFALOES 1
In an early kick-off at the same venue, Green Buffaloes striker Friday Samuâ€™s second-half header sank Zanaco, ROBINSON KUNDA reports.
Samu scored the solitary goal in the 46th minute from a Sebastian Mwansa corner to ensure the soldiers kept alive their ambitions of clinching the Charity Shield.
Zanaco could have restored parity on 48 minutes but defender George Chilufya headed over the cross-bar with only Buffaloes goalkeeper Davy Kaumbwa to beat.
Midfielder Charles Zulu also had chance to level in the 78th minute but headed straight at Kaumbwa.
â€œWe are happy at least itâ€™s what we wanted to reach the final. Zanaco were better but we utilised our chances. Congratulations to coach Numba [Mumamba], he has put up a strong team,â€ Buffaloes mentor Bilton Musonda said.
â€œWe were a better side even if we lost. At least we have seen that we are ready for the CAF Confederation Cup,â€ Zanaco coach Mumamba Numba said.
The Charity Shield final is billed for March 9.