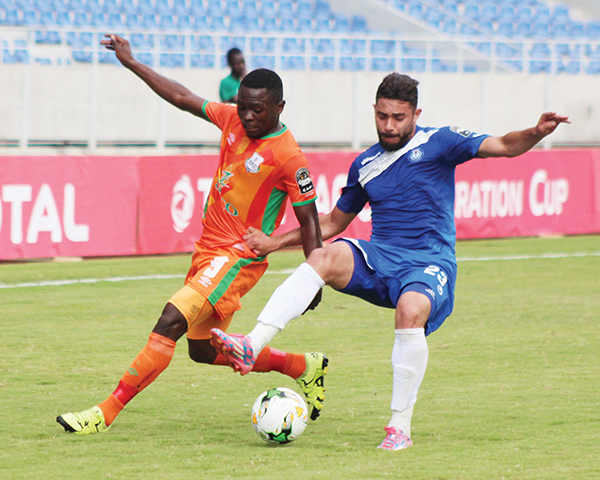 MULWANDA LUPIYA, Ndola
ZESCO United players Ben Banh and Jesse Were are targeting winning the Confederation Cup.
Defender Banh said in an interview in Ndola yesterday that winning the Group C opening match against Egyptian side Smouha at Levy Mwanawasa Stadium was a step in the right direction.

Zesco edged Smouha 1-0 courtesy of a Were strike from a penalty.
“Of course the target is quite known because after the semi-final in the Champions League, our target not for myself but for the team is to carry this trophy but we have to work very hard because all the teams are very good,” said Banh, a Niger international.
The former AS Kaloum and Asante Kotoko defender said the win over Smouha has lifted the morale of the team after a winless streak in three Super Division matches.
“It was very difficult for our morale but I think this is a booster and we still have to work hard. We don’t have to sleep over this win but work hard so that in the coming games we can carry the day,” Banh said.
Were is looking forward to helping Zesco advance further in the competition.
“Last year it was the semi-final, so this year we want to go a step more in front and that will be the final. We are praying for that and we are waiting for that but we just have to take each game one by one.
“For me, my target is first the team. The team must do well and if I score goals, that will be a plus for me because I want to help the team move further,” said Were, who scored four goals in the 2016 CAF Champions League.
The lanky forward has netted three times in the competition.
Were said the morale is now back in the team and is looking forward to Friday’s Super Division Week Six clash against City of Lusaka at Woodlands Stadium.
Zesco and Recreativo Libolo of Angola have three points apiece.
Libolo overcame Sudanese side Al Hilal Obeid 1-0.