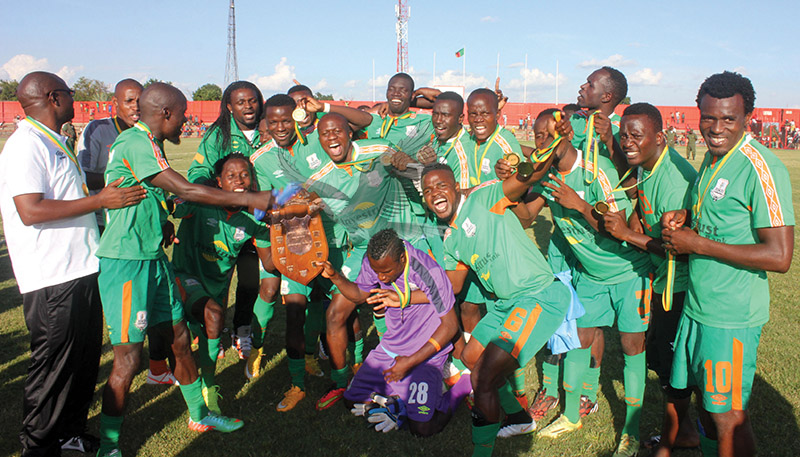 VICTOR KUMWENDA, Lusaka
THE 2016 season gets underway today with Zesco United and Power Dynamos doing battle in the Samuel â€˜Zoomâ€™ Ndhlovu Charity Shield semi-final at Nkoloma Stadium in Lusaka.
In an early kick-off at the same venue, Zanaco face Green Buffaloes.
ZESCO v POWER (15:15 hours)
The teams met three times last year with Zesco winning all the matches.
Zesco beat Power 3-1 in the Charity Shield final at Nkana Stadium in Kitwe, won 2-0 in a league match away and 3-0 in Ndola.
The Ndola side went on to win the Super Division title while Power finished third.
Today, the teams will be meeting for the first time this year.
Zesco will come into the clash against Power in a confident mood after beating South Sudanese outfit Al Ghazala Wau 2-0 in last Sundayâ€™s CAF Champions League preliminary round first leg.
Coach George Lwandamina is likely to retain goalkeeper Jacob Banda ahead of Lameck Nyangu with Dauti Musekwa, Ayo Oluwafemi, David Odhiambo and Ivorian Ben Adama Banh will form the rearguard.
Banda missed the match against Al Ghazala due to suspension.
In midfield, Cletus Chama, Kenyan international Anthony Akumu Agay, Mwape Mwelwa and Misheck Chaila will dictate play.
Jese Were of Kenya will partner Congolese forward Idris Mbombo upfront.
Mbombo and Chama contributed a goal in last Sundayâ€™s triumph over Al Ghazala.
Lazarous Kambole is another option in attack.
â€œIt is an important game as it will help us prepare for the CAF Champions League match [against Al Ghazala Wau]. We are ready for them [Power]. I know they are determined to beat us because of what happened last year so it will be tough,â€ said Lwandamina referring to Zescoâ€™s three victories over Power.
But Power coach Tenant Chilumba is confident of ending Zescoâ€™s dominance.
â€œThey [Zesco] beat us in last yearâ€™s final, where we felt that we gave the game away a little bit. It is a chance to show we have improved. Itâ€™s our first game and the first trophy is at stakeâ€¦ we want to win it,â€ Chilumba said.
Power will, however, miss defender Christopher Munthali, who is serving a two-month ban for breach of contract.
Chilumba will, however, rely on forwards Conlyde Luchanga,Â Â  Martin Phiri and Luka Lungu for victory.
Zesco have won the shield three times – 2007, 2011 and 2015 while Power bagged it in 1998, 2004, 2009, 2012 and 2013.
ZANACO v BUFFALOES (13:00 hours)
â€œBuffaloes were very strong in the second round of last season [2015] and we must be ready for a tough match, but we must fight to win,â€ Zanaco coach Mumamba Numba said.
When the teams last met last year at Sunset Stadium in Lusaka, the match ended 1-1 while Zanaco won 3-0 at Woodlands Stadium.
Numba is eager to get victory as it will boost his charges ahead of next monthâ€™s Confederation Cup first round match.
Skipper Ziyo Tembo, Aaron Katebe, George Chilufya and Lee Ngoma will marshal the backline while Richard Kasonde, Aubrey Funga, Roderick Kabwe and Saith Sakala will sting passes in midfield.
In the absence of striker Moses Phiri who has trekked to Portugal, Dave Daka and Augustine Mulenga will lead the attack.
On the other hand, Buffaloes will look to skipper Christopher Katongo for victory.
Katongo was in tip-top form at the African Nations Championship in Rwanda where Zambia reached the quarter-finals and if he displays that performance, then Zanaco will be on the receiving end.
â€œWe have done our home work but this is a local derby so anything can happen. I know the players are eager to add another trophy to the cabinet especially after winning the Barclays Cup,â€ Buffaloes coach Bilton Musonda said.
Katongo will partner either Friday Samu or Joseph Masialeti upfront while Buchizya Mfune will marshal the defence with Davey Kaumbwa in goal.
The Charity Shield final is set for March 5.