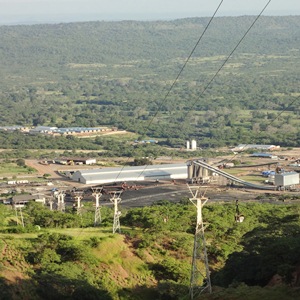 NANCY SIAME, Lusaka
ZESCO Limited says it will be buying at least 300 megawatts (MW) of electricity from the Maamba Collieries-owned thermal power station upon completion of the 330 kilovolt (KV) transmission line being constructed from Maamba to Muzuma in Choma.
Zesco spokesperson Henry Kapata said the project will benefit the country when completed this year.
He was speaking at the 51st Zambia International Trade Fair (ZITF) when he addressed a group of engineering students from various learning institutions.
Mr Kapata noted that buying power from Maamba Collieries will augment the Zesco system in meeting the national demand for power.
He said the power utility connects an average of 200 new customers daily and has a backlog of 25,000 yet to be connected
â€œThe mini hydropower projects being upgraded and being established throughout the country will help in reducing load shedding as they will be taking care of power deficits in their respective localities,â€ he said.
He added that the upgrading of Musonda Falls hydro-power plant from 5 MW to 10 MW will also improve supply as will the upgrading of Chishimba Falls station to 14.8 MW.
â€œZesco projects take long to complete because they are massive projects that attract colossal sums of money,â€ Mr Kapata said.
And Mr Kapata said Zesco has so far distributed about 1.9 million energy-saving bulbs throughout the country.
He encouraged consumers to use energy-saving bulbs to conserve power.