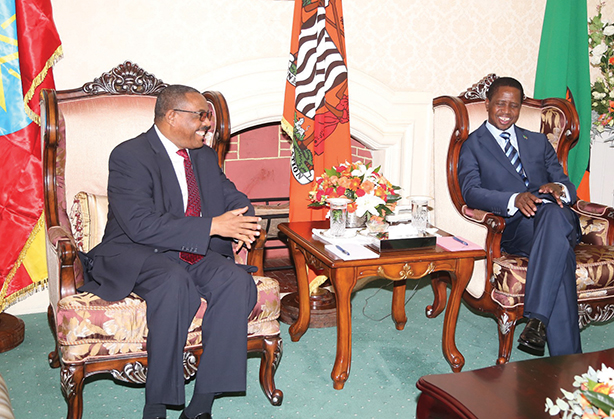 SOME schools of thought say the most intelligent or brilliant of us all are not usually the most successful, financially or career-wise.
A lot depends on the ability of a person to break into circles, meet people, network and interact.
In as much as this applies to individuals, it also applies to countries.
No country that keeps to itself can experience significant development because progress comes through engagement and learning from those who have gone ahead.
It is therefore elating that during President Lunguâ€™s reign, so far, Zambia has experienced heightened interactions with other countries.
President Lungu has been proactive in strengthening relations and fostering development by embarking on strategic visits. This, though, has not settled well with some armchair critics who think it is a drain on government coffers.
It should however be noted that President Lunguâ€™s stance on diplomatic relations is paying off as evidenced by an influx of high-profile individuals and dignitaries the country has been receiving.
We are elated that a great son of Africa, Ethiopian Prime Minister Hailemariam Desalegn, is currently in the country on a three-day visit.
This is a man in the driving seat of one of the worldâ€™s fastest growing economies.
According to the World Bank, Ethiopiaâ€™s â€œstrong and broad-based growth over the past decadeâ€ has lifted its GDP to an impressive average of 10 percent per year.
The high growth rate is what has catapulted Ethiopia from being identified with the infamous famine of the 1980s into a premier club member of the worldâ€™s fastest growing economies.
The East African nation is well known for its robust leather industry which processes finished products as opposed to exporting raw materials.
The Ethiopian aviation industry is one of the worldâ€™s success stories and it is entirely managed by Ethiopians. The aviation industry is actually the biggest employer in Ethiopia surpassing the civil service.
And despite having bad soils and unfavourable climatic conditions, Ethiopia also boasts of a vibrant agriculture sector.
Ethiopia has also made remarkable progress in the achievement of Millennium Development Goals with evident progress in key human development indicators such as access to education, access to clean and safe drinking water and reduction in mortality rates.
The visit therefore by the premier is timely in that President Lungu is working to ensure that he leaves Zambia better than he found it at the end of his tenure.
It is indisputable that Zambia stands to benefit from this historical visit by this son of Africa.
We are optimistic that interactions between the two African countries will not only strengthen bilateral relations but spur both countries to greater heights of development.
It is inspiring that a number of important agreements were sealed between the two countries, in sectors such as communication, information and media, water resource management, irrigation and energy.
A memorandum of understanding was also signed between the chambers of commerce of Ethiopia and Zambia.
We are hopeful that through these agreements, the two countries will fully exploit the trade potential that lies between them.
Chambers of commerce will do well to heed President Lunguâ€™s counsel to ensure that these agreements begin to bear fruits in the shortest possible time.
The two sides should expedite the creation of a sub-committee as directed by President Lungu to expand volumes of trade and promote investments between the two countries.
Ministers will also do well to ensure implementation of exchange visits and study tours at various levels to exchange ideas and experiences, as well as best practices on government policies, projects and programmes.