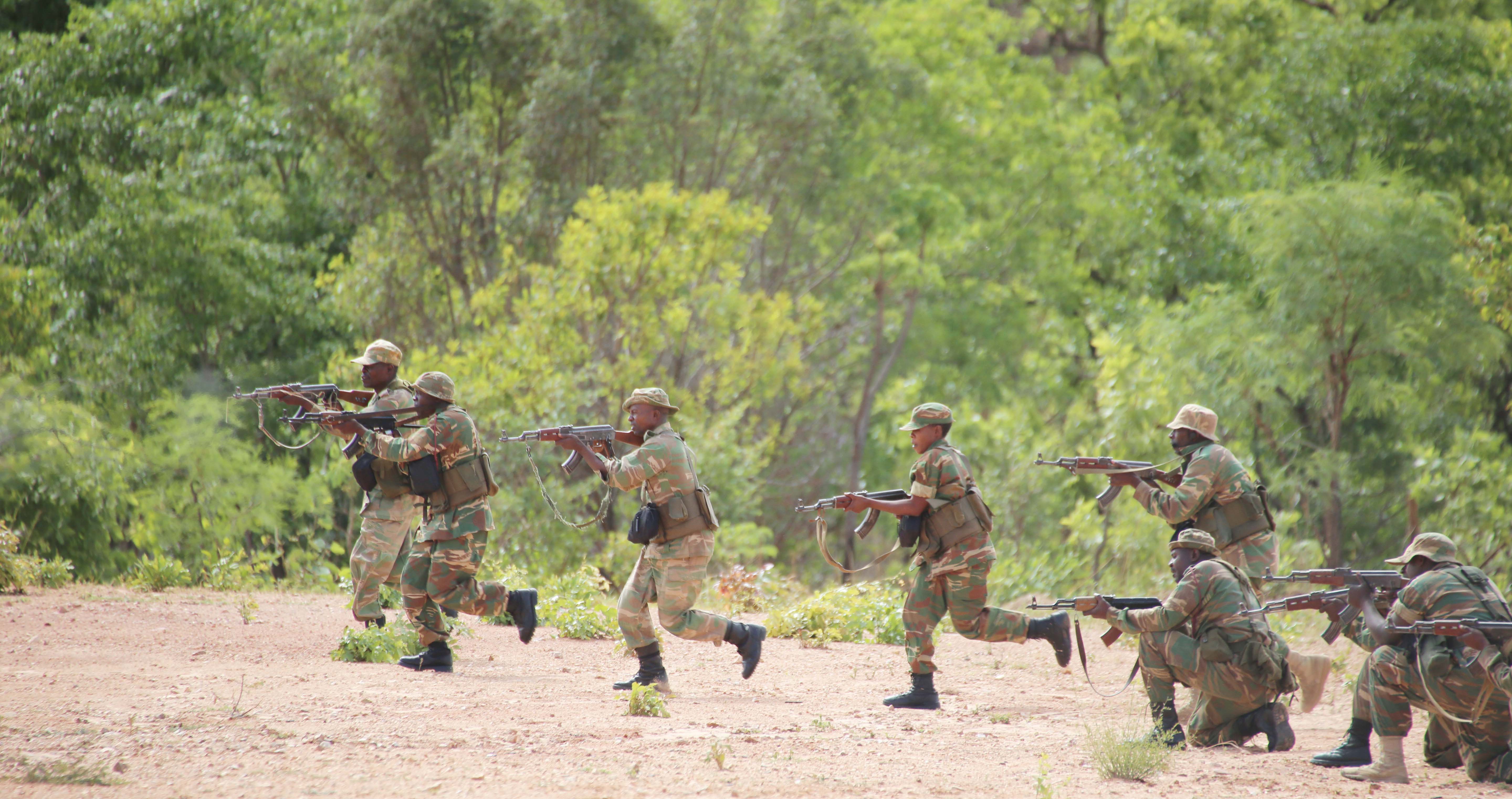 KELVIN KACHINGWE, Lusaka
A VILLAGE has been taken over by rebels, and the platoon commanderâ€™s task is to re-capture it in an operation with a special code-name.
After the rebels had captured the village, they established base there and are willing to defend it, if need be.
For the platoon commander, his task is to seize it back and to hold ground thereafter. With a clear map of the village, he decides to use three platoons in his attempts to recapture the community.
One platoon will make the advance attack, the other will seal off the area where rebels can possibly make a quick exit, and the other will set up a check-point to cordon off and scrutinise whoever is entering the camp once they have recaptured it.
Having recaptured the village, they have reported that they have sustained one casualty and they will need to apply first aide. The rebels have also suffered some casualties in the process. They have to quickly apply the first aide.
While they are guarding the camp, two or three trucks are coming in and it is their duty to search each and every vehicle coming in to establish whether it is a friendly one or not.
One truck enters, and they think it is a friendly force, only to realise that it is not. They order everyone to disembark from the truck, and quickly inspect the truck for any weapons including in the passengers boots and pockets.
This was just one of the demonstrations that was conducted at the Zambia Battalion (ZAMBATT) II and French field training exercise at Nanking Army Battle Training Area, located outside Lusaka, recently.
The French have been rendering support in training the Zambatt II Company, which is part of the battalion scheduled to relieve the Zambatt I contingent in the Central African Republic (CAR) next year.
High Commander of the French Armed Forces in the Southern Indian Ocean Brigadier General Reignier Franck, who was present at the closing ceremony of the Zambatt II and French field training exercise, says the peace-keeping mission in CAR requires serious training as it is demanding.
Indeed, the mission in CAR, once ruled by Jean-Bedel Bokassa, who proclaimed himself emperor and renamed the country the Central African Empire, is demanding.
In 2013, South Africa lost 15 troops following an offensive launched by the Seleka rebel coalition.
The CAR, which is due to hold presidential elections this month, has been in a bloody state since the rebel group seized power in 2013.
Muslim rebels from a coalition group called Seleka, seized power in a country that is predominantly Christian.
Although it handed power to a transitional government in 2014, violence followed as thousands were killed and the country was effectively partitioned.
The killing of a Muslim man in Bangui, the capital was followed by inter-communal violence which again forced thousands to flee their homes as shops and humanitarian offices were destroyed.
The conflict started after the Seleka rebel coalition accused the government of President FranÃ§ois BozizÃ© of alleged failure to honour previous peace agreements.
But the CAR is a region that has seen its fair share of violence, beginning in the 1920s when indigenous Africans used to stage violent protests against abuses by the French concessionaires of the area.
Against that background, the importance of training of the Zambatt II with the French troops, which ran from November 2 – 26, cannot be underestimated.
Zambia Army deputy commander Topply Lubaya, who was present at the closing ceremony, was happy with the training exercise.
â€œHaving witnessed the demonstrations, I am glad to say that the aim of the exercise has been fulfilled and that the participants have learnt a lot from this combined exercise,â€ Major General Lubaya said.
â€œAdministratively, I am aware that you could have had hitches with certain requirements. However, allow me to mention that it was not intentional. Weâ€™ll strive to do better next time resources allowing.â€
Indeed, Nanking army battle training area may lack certain requirements, but it is certainly a typical combat outpost.
â€œOnce you complete your training here, then youâ€™re a real soldier. As you can see, it is very hilly, either youâ€™re going up or youâ€™re coming down,â€ says one of the soldiers.
Undeniably, Nanking is the perfect place for physical training.
According to the United Nations peace-keeping training manual, it is a basic requirement that all soldiers keep themselves physically fit.
â€œThis is an important aspect of military life at home, especially for troops in operational units. In UN PKOs [peace-keeping operations] the demand for physical fitness can be greater than at home,â€ the manual reads.
The reason for this is that UN PKOs can experience operations over a protracted period; can be operating very often in climatic and geographical conditions which are outside the experience of the troops; and they may require administrative personnel to be at a higher level of physical fitness than would normally suffice at home.
The UN gives certain guidelines regarding physical fitness.
â€œThe best approach to physical fitness for troops to embark on a UN PKO is to establish an appropriate level of fitness for all ranks; prior to concentration for pre-deployment training, ensure that all potential UN personnel are training towards achieving the acceptable level of physical fitness,â€ the guidelines read.
â€œOnce personnel arrive at the concentration area, they should be tested for physical fitness; those not attaining the appropriate level should either be put on a personal fitness programme or failed for acceptance and a replacement called.â€
The physical fitness level and training module should include tests incorporating endurance, strength and physical skills such as obstacle course training.
In addition, a field exercise involving endurance marching on hilly terrain, including the setting up of base camps should be included in the module. Physical training should be incorporated where possible into all training such as marching to a training area instead of using transport.
And that is where the Nanking fits in well.