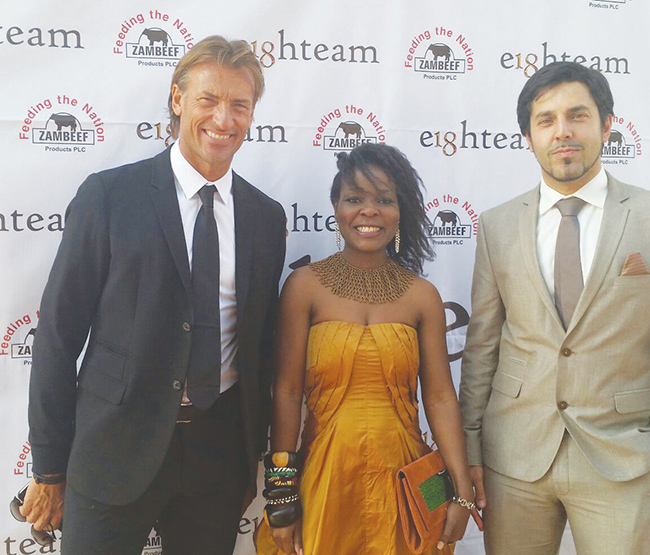 NKOLE NKOLE, Lusaka
E18HTEAM, the Zambian documentary feature film that tracks the journey of â€˜tragedy to triumphâ€™ of the national football team, screened at Cannes Cinema at the Theatre Alexandre III last weekend in France.
Believed to be the first Zambian film to screen at this event, it highlights how Zambian artistic talent has been elevated to a level where it can be featured alongside global film industry leaders.
According to a press release made available to the Weekend Mail, the screening was attended by cast member Herve Renard, the football coach that led Zambia to victory in the Africa Cup in 2012.
â€œZambia holds a special place in my heart and this film, for me, captures what Zambia meant to me. For a long time, I have been reflecting on that time and this film allows me to hold on to that memory and keep Zambia close to my heart,â€ Renard shared.
Zambian producer Ngosa Chungu and her Spanish production partner Juan Rodriguez-Briso, who also directed the film, said they were honoured that it could be the first Zambian film to be screened at Cannes Cinema out of competition.
â€œThank you for allowing us to share an important part of Zambiaâ€™s history with France and allowing us to preserve an important part of Zambian culture and identity,â€ Ngosa remarked after the screening.
Since its premiere in October 2014, the film has gone on to be selected at European and Asian international film festivals. E18hteam has also won the Panenka Audience Award at the Offside Festival in Spain.
The film was selected for Cannes Cinema when it was completed with help, in form of K1.5 million, from Zambeef Products that allowed producers to acquire the film rights in order for it to gain worldwide distribution.
This film tells the story of how the Chipolopolo (the Copper Bullets) managed to triumph at the Africa Cup of Nations that was co-hosted by Equatorial Guinea and Gabon in 2012, despite being the â€˜underdogsâ€™.
Captain Christopher Katongo, FAZ president Kalusha Bwalya and coach Renard are among the narrators who explain this destined win.
The documentary also explores how Zambia always had the potential to achieve at the highest level, which is why the 1993 tragedy in Gabon was such a blow to the nationâ€™s spirit.
Its producers believe that for the Chipolopolo to then go on and win in the very place where so much was lost 18 years and nine months earlier, makes for an inspirational story.