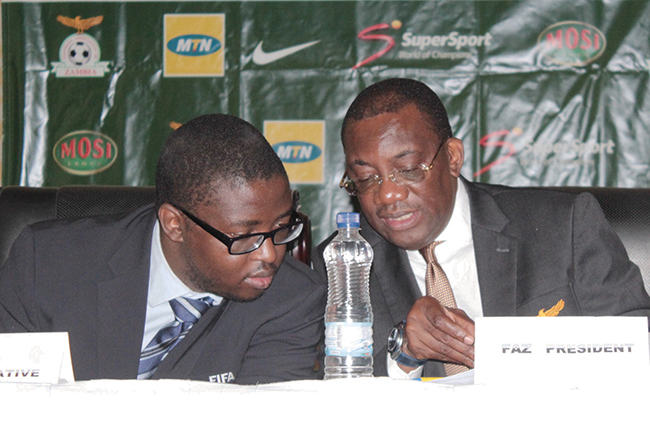 ROBINSON KUNDA, Lusaka
FOOTBALL Association of Zambia (FAZ) councillors yesterday threw the draft constitution back to the organisationâ€™s legal committee after noticing a number of lacunas.
And FIFA members associationsâ€™ manager Luka Nicola says Zambia risks being suspended if councillors do not adopt the new constitution by next month-end.
Meanwhile, the councillors did not discuss the suspensions of FAZ vice- president Richard Kazala and committee member Blackwell Siwale in line with the National Sports Council of Zambia (NSCZ) directive.
During the emergency council meeting held at Government Complex in Lusaka yesterday, FAZ councillors observed that there were a number of articles in the draft constitution that needed clarification before coming up with the final document that will be presented at next monthâ€™s annual general meeting for adoption.
According to the draft constitution, FAZ has proposed to come up with the Electoral College of 80 delegates with all Super Division teams having an automatic right to vote but some councillors felt that not all teams in the elite division should vote.
The association has also proposed the introduction of a nation-wide Division One.
However, some members said the introduction of zones has diluted competition but others felt Zambia is not economically ready to have a nation-wide Division One because it is expensive.
FAZ has also proposed that the position of treasurer should be abolished in line with the FIFA constitution.
FAZ legal committee vice chairman Sokwani Chilembo said the draft constitution was in line with the FIFA statutes and called on delegates to support it.
FAZ president Andrew Kamanga said yesterdayâ€™s meeting was consultative and was happy that councillors responded positively.
Kamanga urged the councillors to ensure they study the document and make necessary submissions in time because the new constitution must be adopted by March 31.
â€œTodayâ€™s meeting shows clearly that some councillors have not been reading these documents when we give them. They must study it and make submissions within a week,â€ he said.
Kamanga said the process of amending the FAZ constitution started in 2013 and should be supported because it is now long overdue.
And Nicola said Zambia risks being suspended if the Electoral College is not reduced by March 31, 2017.
â€œFAZ has been reminded several times about amending the constitution in line with the FIFA statutes. We gave them September 31, 2016 as deadline but after discussions, we agreed to postpone to March 2017,â€ Nicola said.
FAZ general secretary Ponga Liwewe said the revised draft constitution will be tabled for adoption at the annual general meeting set for March 26.
And quoting article 59.5 of the FAZ constitution, Liwewe said the meeting would not proceed to discuss the suspensions of Kazala and Siwale.
The article states that â€œthe association, all member clubs, member associations, players to comply fully with statutes, regulations, directives and decisions of FIFA, CAF , COSAFA, NSCZ and National Olympic Committee of Zambiaâ€.