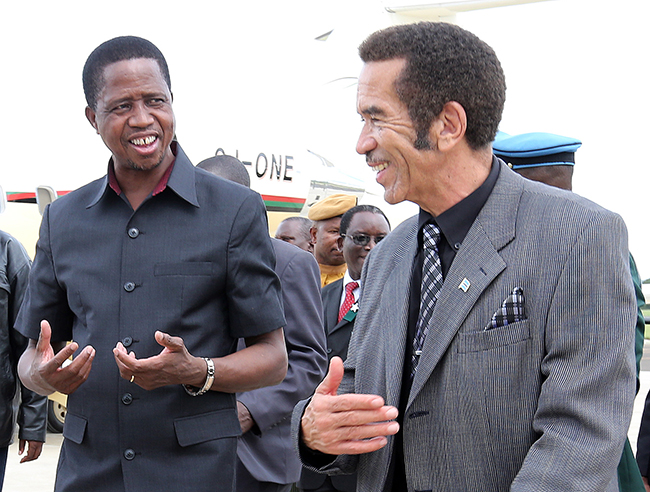 CHIMWEMWE MWALE, Lusaka
PRESIDENT Lungu says his administration will study Zambiaâ€™s membership to the International Criminal Court (ICC) before deciding the way forward.
The President said Zambia will also present the matter at the next African Peer Review Mechanism (APRM).
This follows a resolution at the recent African Union (AU) summit in Ethiopia in which member states were allowed to belong or pull out of the ICC.
President Lungu said the matter, like other issues, would be deliberated by members of the central committee (MCC) before a decision can be made by his administration.
â€œThe party sets the policy and Government just stamps on the party what we told the people. What we will do is what the party is saying, so when we have an issue like this, we take it to the central committee, the highest organ of the party to deliberate and they tell us how we are going to go about it,â€ President Lungu said.
The President said this yesterday in an interview with journalists shortly before departure for Botswana for a one-day working visit.
The head of State said the matter requires critical consideration noting that â€œitâ€™s a question that has divided the continentâ€.
â€œAnd for now, without pre-empting matters, I have been told to study the situation because some African countries have said they will withdraw and others are not withdrawing, itâ€™s a voluntary matter and we should ask the people in Zambia what they think.
â€œItâ€™s a good tool of governance on paper but it appears to be weighed heavily against African heads of State and that is why there is this division. Zambia will critically study the situation. We agree that itâ€™s a good tool of governance and we want to raise it at the next APRM as Zambia and find out how we can resolve it,â€ President Lungu said.
And JIMMY CHIBUYE reports from Botswana that President Lungu yesterday arrived in Kasane for a one-day State visit and inspection of the multi-million dollar Kazungula Bridge.
President Lungu was received by his counterpart Lieutenant-General Ian Khama.
The two leaders later went for a game view in the Chobe National Park before a dinner hosted by President Khama in honour of President Lungu last night.
President Lungu and President Khama are today expected to hold bilateral talks before inspecting the multi-million dollar 923-metre long Kazungula rail bridge.
The two heads of State will inspect the bridge starting from the Botswana side and later proceed to the Zambian side.
President Lungu is later expected to return to Botswana for his departure to Zambia today.
The US$259.3 million bridge, which will be constructed over the Zambezi River, is being undertaken by Zambia and Botswana with financial assistance from the Japan International Co-operation Agency and the African Development Bank.
The railway and road-bridge will also have two â€˜one-stop border postsâ€™ on either side of the bridge in Zambia and Botswana.
Construction works of the bridge started in 2014 and are expected to be completed in December next year.
Others who received President Lungu were Minister of Housing and Infrastructure Development Ronald Chitotela, his Transport and Communication counterpart, Brian Mushimba, Southern Province Minister Edify Hamukale and High Commissioner to Botswana Patrick Tembo.
Botswanaâ€™s Minister of International Co-operation Pelononi Kenson-Moitoi and her Transport and Communications counterpart, Kitso Mokaila, were also at the airport.