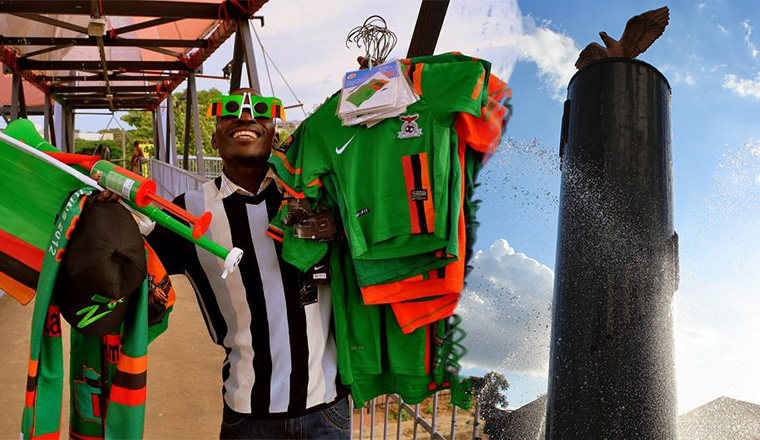 By OWEN SICHONE
ISNâ€™T it ironic that a country known for its peace and tranquillity should proudly call its national football team the â€˜Copper Bulletsâ€™?
It is a fact that the armaments industry does consume an awful amount of copper, and it is also true that copper bullets is not a correct translation of Chipolopolo. After all, not all ammunition is copper based. You can make Chipolopolo from copper or from lead alloys.
But that is what you get when you outsource radio commentaries to foreign experts.
My suggestion is simple; Nigeriaâ€™s eagle can be seen playing football on the official emblem of the Nigerian Football Federation, just like our â€˜noble eagleâ€™ on the FAZ emblem.
It does not matter that the Nigerians are the Super Eagles and that the brand is recognised worldwide.
Senegal, Algeria and Cameroon are all lions, even though the â€˜Indomitable Lionsâ€™ are more famous because of their past glory.
There is room for more eagles at the table and Zambiaâ€™s claim is the strongest.
There is no eagle on the Nigerian flag, although you cannot miss its powerful and triumphant pose on the court of arms and presidential flag.
In Zambia, on the other hand, the fish eagle is everywhere – the flag, court of arms, presidential flag, Zambia Air Force ensign and even the Zambia Police Service flag.
The Zambia Police football club is thus called Nkwazi and we should not ask why the Zambia National Service sports teams tend to be Green Eagles. Zambia is eagle country it is not copper bullet territory like fake Caliph Baghdadiâ€™s Islamic State or take your pick of any Wal-Mart in America. We are Eagles NOT bullets, and that is not even a nickname.
How in any case did we end up as copper bullets? In the period of de-UNIPification, the nick-name KK Eleven was unacceptable even though it was well established. Nobody suggested FTJC Eleven but there was a felt need for a new nickname. At some point the name Mighty Zambia was used but there is only one Mighty and that is Mufulira Wanderers even if most Zambians have never heard of them due to the disasters that befell sports clubs in the privatised mines.
Chipolopolo in our oral traditions was first used by Serenje Kalindula to praise Rhokana United/Nkana FC our very own Red Devils when they were the dominant team in the country -and that is where we should leave it.
You might say, what is in a nickname? Everyone knows that officially it is the Zambian National Team but those outsourced foreign commentators and the local reports who follow them have somehow translated Chipolopolo as Copper Bullets. Zambia is indeed copper country but it is not known for its bullets. So how people see us and how we define ourselves extends to our nicknames as well and since the Zambia National Team seems NOT to have established an identity of its own we can only urge FAZ to look at their own emblem and ask themselves whether they see Copper Bullets or our noble eagle in its flight. One can imagine the players and the spectators in the stadium singing the national anthem and being inspired by that reference to the eagle. It is possible to inspire the players with chants of Chipolopolo iye â€“ that is clear, but there is only one Ucar, only one Mighty and only one Chipolopolo and I am suggesting the Zambia National Team is not the true Chipolopolo, Nkana FC is.
But in any case why should a peace loving country like ours be championing the cause of bullets, be they copper lead or steel? Many of our fellow Africans do not want to be reminded of bullets because their scars have still not healed and they can show the tremendous damage that has been done to their countries by the foreign arms dealers who supply the bullets and go away with the diamonds, ivory, timber or even copper to live comfortably in Switzerland leaving us to take care of the orphans, the wounded, the mine clearance and the ghastly open pit mines.
So let us call our national teams (all of them) what they are â€“ Eagles. I know the rugby fraternity prefers lechwe as a relative of the springbok but so far the affinity has not translated into glory on the pitch. It is not as if we are proposing a bizarre nickname, or even imitating Nigeria, it is a fact that Zambia is eagle country and there is no reason why the Super Eagles cannot share the African football skies with other eagles. The exact identity of the Zambian soccer eagle is not for me to say but it is time that we gave back the Chipolopolo nickname to its original owners.
The author is director of the Dag Hammarskjold Institute of Peace and Democracy at the Copperbelt University.

Of motorists and fools
Comfortable in his space: Tale of a local innovator