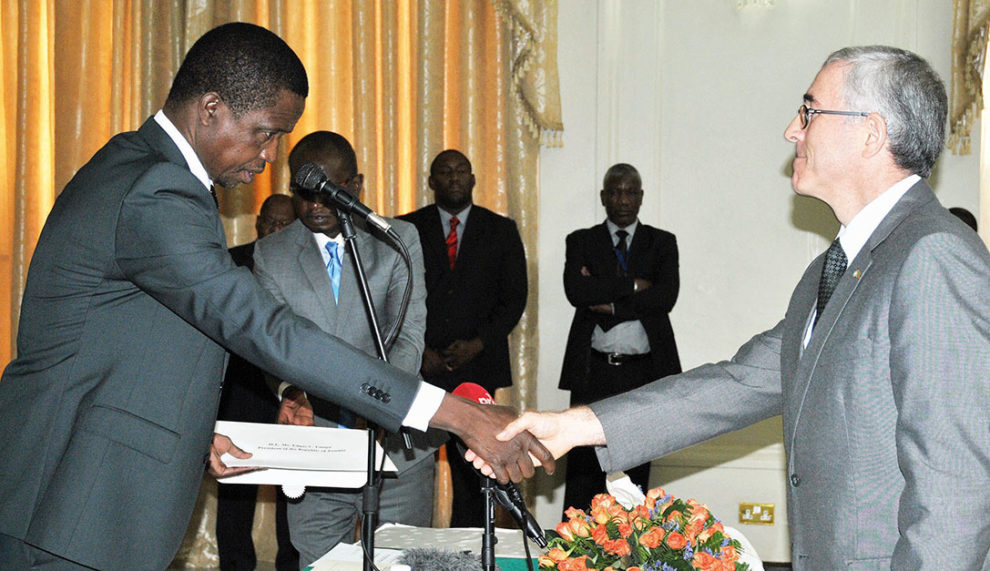 CHARLES CHISALA, Lusaka
ZAMBIA-ISRAEL bilateral relations and economic cooperation appear to have entered a crucial phase with plenty of promise.
Israel’s Minister of Defence and that country’s second most powerful man Avigdor Lieberman visited Zambia this month as a special envoy of Prime Minister Benjamin Netanyahu.
During Mr Lieberman’s visit, President Edgar Lungu made remarks that might have sounded trite but they carried far-reaching importance for both countries.
He said Zambia is eager to learn how Israel has used its powerful military to become one of the world’s most developed countries.
He noted that the Israeli Defence Force (IDF) has, for example, helped the Jewish nation boost agriculture.
Indeed, Zambia’s military has a lot to learn, and benefit, from the catalytic role the IDF has played in the Middle East country’s impressive economic development.
Israel has the most technologically advanced military in the world. In fact, the western media tout it as the world’s unchallenged technology superpower.
According to the New York Post of January 29, 2017 the tiny country is one of the world’s top weapons exporters with US$ 6.5 billion in annual arms sales.
Since its creation as a nation state in 1948, barely three years after the end of World War II, its military has been dedicated to continuous research.
Its unassailable technological edge has served as an effective deterrent against the existential threats posed by its belligerent neighbours and their powerful regional allies.
In an article authored by Yaakov Katz, the New York Post said Israel has changed the way wars are fought ever since it fought the two wars with its Arab arch-enemies in 1967 and 1973.
In the famous six-day1967 war, the powerful and well-established armies of Egypt, Syria and Jordan attacked the toddler state from three fronts at once, threatening its nascent existence.
Israel, which was only 19 years old as a nation then without a fully established military, fought back in a bitter fight for survival and in six days dealt the Arab coalition a crushing and humiliating defeat in which they lost vast tracts of territory.
Since then, the country has been developing highly advanced military technologies, including smart but deadly pin-point defensive and offensive weapons systems.
Israel was the first country to successfully use armed unmanned aerial vehicles (UAVs) or drones in combat and earns the country billions of United States through weapons exports.
“Since 1985, for example, Israel is the world’s largest exporter of drones, responsible for about 60 percent of the global market, trailed by the US, whose market share is under 25 percent.
“Its customers are everywhere – Russia, South Korea, Australia, France, Germany and Brazil,” the New York Post reported.
It said despite Israel’s small size, about 4.5 percent of its gross domestic product (GDP) is spent on research and development, the highest in the world.
The economic diplomacy foreign policy President Lungu has adopted has therefore come as a blessing to Zambia.
The country must leverage on the goodwill of such nations as Israel as it implements the ambitious Seventh National Development Plan and Vision 2030.
In March last year, the President visited the ‘Blessed Nation’ and saw with his own eyes its breath-taking levels of development thanks to its tech-smart military.
The technology the IDF develops through research spills over to civilian uses in the energy, agriculture, health, construction, communication and aviation sectors.
During his visit, President Lungu said Zambia, which is 35 times bigger than Israel, a desert, could also achieve that level of progress because it has good rains, water and land.
After Mr Lieberman’s recent, visit the President expects relevant government agencies and ministries to accelerate the actualisation of the several agreements the two governments signed in Israel in March last year.
Of course, there has been some progress.
For example, Israel last year sent a team of medical personnel while the Ministry of Higher Education has signed a five-year educational cooperation agreement with the University of Tel-Aviv, Israel, aimed at enhancing academic cooperation.
Also, a team of Israeli experts is expected to help Zambia carry out a survey on the contamination of ground water in Lusaka.
Some Israeli investors have started the process of investing in agriculture.
But that is not good enough.
During his interaction with Mr Lieberman, President Lungu made it clear that he wants the bilateral relations to result in economic benefits.
He expects Zambia to replicate some best practices Israel has implemented, especially in agriculture.
Israel has demonstrated its commitment to the strengthening of cooperation with Zambia.
Mr Netanyahu has shown his seriousness by sending Mr Lieberman, a very senior member of his coalition cabinet.
Mr Lieberman commended Zambia for its efforts to escalate bilateral cooperation with his country following the high-level talks between Mr Netanyahu and President Lungu.
He said President Lungu’s visit to Israel has contributed to the strengthening of bilateral relations between the two countries.
Israel is warming up to Africa as evidenced by the mini-summit in Entebbe, Uganda, in July 2016, between Mr Netanyahu and leaders of seven African countries, including Zambia, during the 40th anniversary of the ‘Operation Entebbe’.
Mr Netanyahu became the first Israeli leader to visit Africa after the late Yitzhak Rabin in 1994 and reached out to African countries.
With its population currently at 8,415,778 as of March 22, 2018, based on the latest United Nations estimates, Israel boasts a healthy GDP per capita of US$37,292.61 (2016) and a national GDP of US$318.7 billion (2016).
In October 2016 the World Economic Forum rated it as the second most innovative country in the world.
An article published by NoCarmels titled ‘World Economic Forum: Israel Is 2nd Most Innovative Country In The World’ authored by Einat Paz-Frankel said Israel is second only to Switzerland, quoting the Global Competitiveness Report of 2016-2017.
Zambia stands to gain from cooperation with this highly developed country, as President Lungu has rightly observed.