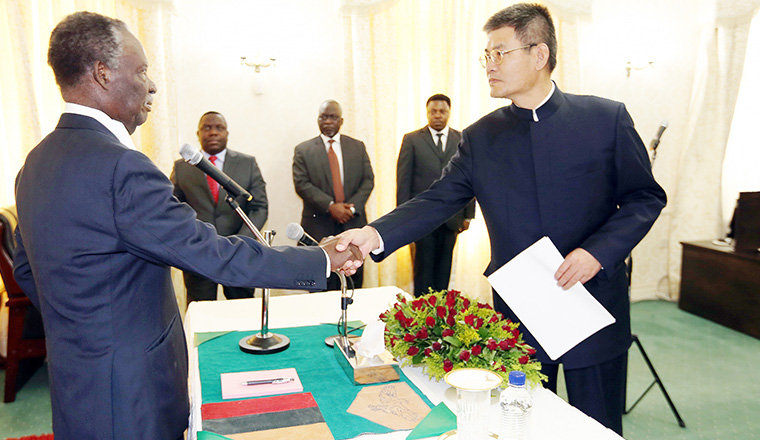 By KAPALA CHISUNKA
ZAMBIAâ€™S Foreign Direct Investment (FDI) stocks from China have exceeded US$2.6 billion dollars.
Chinese Ambassador to Zambia Yang Youming said Zambia is now Chinaâ€™s eighth major trade partner in Africa as well as a major copper supplier while China is Zambiaâ€™s third major trade partner.
â€œThe trade volume between China and Zambia reached US$3.84 billion in 2013 while export from Zambia to China amounted to US$3.11 billion which makes Zambia one of few African countries marinating trade surplus with China,â€ Mr Yang.
Mr Yang was speaking on Friday when he officiated at the Lawrence Sikutwa and Associates (LSA) Limited group of companies cocktail business party.
He said over 500 Chinese companies are investing and operating their businesses in Zambia in sectors such as mining, construction, manufacturing, agriculture and finance a situation he said has subsequently resulted in the creation of over 50,000 jobs for Zambians.
Mr Yang said there is a lot that Zambia can learn from China through their economic bilateral relations which has made it a major global industrial manufacturer, exporter and investment destination.
â€œSince the initiation of reforms and opening in the late 1970s, Chinaâ€™s economy has sustained high-speed growth. In 2013, Chinaâ€™s Gross Domestic Product (GDP) reached US$9,300 billion ranking the second in the world,â€ he said.
The ambassador said the total import-export volume reached US$4,160 billion ranking the first in the world while US$123 billion of the FDI into China is the second largest in the world.
â€œZambia would like to share its experience of economic development with Zambia and is willing to invite Zambia to take a lift in Chinaâ€™s high speed economic train so as to strengthen the win-win cooperation between the two countries,â€ he said.
Earlier, LSA executive chairperson Lawrence Sikutwa described the rapid pace at which China has industrialised and the growth in both industrial output and expansion of services as phenomenal.
Dr Sikutwa said Chinaâ€™s economic growth did not happen by accident but was as a result of good planning and strategy implementation.
â€œAnyone in business today has China to reckon with; if not as a market or source of supply then as a source of trade finance. There is reason to believe that as her industrial pre-eminence comes to be etched on the world, Shanghai could become a major source of industrial and trade finance,â€ he said.