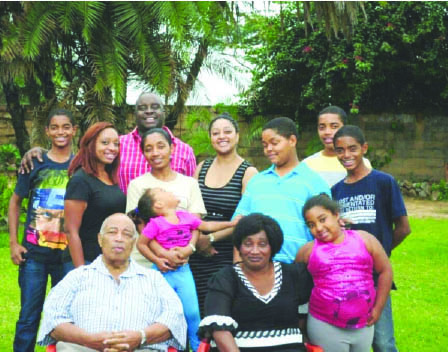 NKOLE NKOLE – Choma
CHOMA town, being a typical farming area and of historic significance to Zambiaâ€™s development, has seen its fair share of settler families that have integrated into the local community, surviving four generations in some cases and still in existence.
One of these families is the Zaloumis family that has lived in southern province for nearly a century. Business was always the lifeline of the family that is well respected in Choma.
And for the three Zaloumis brothers, Dennis, Andrew and Louis, business not only ran in their bloodline, but the profits they realised were from hard work and total discipline.
Louis Zaloumis has seen the town of Choma transform right before his eyes. He is the son of Sarantos Zaloumis who was born in Greece in the year 1898.
Although his memory is fading with age, he still has vivid recollections of Choma town in years gone by.
Louisâ€™ father, Sarantos Zaloumis, sailed to Cape Town, reaching Pemba where he stayed with another Greek family called the Benos while in his 20s.
It was there where he started a transport business with the scotch cart, transporting goods for missionaries of the Methodist Church right up to Old Kasenga, Kantengwa, Namwala and Luchena.
â€œAt one point, on one of his trading trips, he was unfortunate and encountered lions that ate his oxen,â€ Mr Zaloumis shares. â€œIt was real wild country then.â€
Sarantos Zaloumis met the daughter of Chief Shezongo of the Ila, Ellen Mutenge, in Luchena who later became his wife.
They settled in Mapanza, Chilumbwe and had nine children together, namely Dennis, Florence, Louis, Andrew, Nora, Fred, Alice, Jack and Alex; most of them educated in Rhodesia, now Zimbabwe.
Later they moved to a farm in Kalomo where Sarantos passed away in 1954.
Louis Zaloumis worked as a mechanic in Kalomo many years ago and then later moved to Lusaka where he worked still as a mechanic for a man named Stanley.
He then moved to Namwala and opened a trading shop but was still working part-time as a mechanic for various farmers and traders that settled in the area.
Opening yet another trading shop in Maala, Namwala, Louis Zaloumisâ€™s favourite leisure time was cropping hippos and crocodile on the Kafue river for Chief Mungaila of the Ila people.
While in Maala, his brothers Dennis and Andrew approached him to start a trucking business that was famously called Zalbro United Transport.
Given a boost of 12 trucks by the then government, UNIP, they transported coal from Kandabwe to Batoka onto wagons for onward transportation to the Copperbelt.
â€œThe business grew tremendously and we paid off the loan for the trucks and acquired a large fleet of our own trucks, many 30 tonners,â€ Mr Zaloumis explains.
Eventually they transported coal to Maamba Collieries and acquired two aeroplanes. Dennis, Andrew and Louis Zaloumis could all fly.
The UNIP government also awarded them contracts to move maize throughout the Southern province.
â€œUNIP believed in building and supporting Zambian businesses,â€ Mr Zaloumis notes.
Things, however, took an unfortunate turn for the Zaloumis family when the government changed hands in 1991 and the three brothers eventually started selling the business off slowly, buying farms and starting other sustainable businesses.
Mr Zaloumis shared: â€œThe business took a bad hit with the economic changes taking place. I bought a farm in Nega-nega and another in Choma where I do ranching and was still running the shop in Maala, Namwala.â€
He also built a double-storey building where he ran a butchery and his wife Alice ran a restaurant. The building was famously called Delta and now houses the companies FINCA and Investrust bank at Choma town centre.
Mr Zaloumis acknowledged seeing a lot of changes in his lifetime from one car running for miles on end to hundreds of cars on Zambiaâ€™s roads today.
â€œEveryone is now a trader but many young people lack discipline and a good work culture. Many people have become dishonest and want easy money and an easy way out. Hard work is what is needed to bring back pride to our young people,â€ stressed Mr Zaloumis.
Together with his wife Alice, Mr Zaloumis has six girls: Stella, Loretta, Cynthia, Gillian, Pamela and Athina.
One of their daughters, Stella, passed on in 2006 and Mr Zaloumis also has two daughters, Rayella and Natalie, from his first marriage.
â€œWe have eight grandchildren namely: Shaylin, Findlay, Darrell, Brandon, Malcolm, Louis, Amelia and Loanna and a ninth one on the way.â€
Now 81, Louis Zaloumis says his lifetime of memories and numerous stories can fill a whole rim of paper.