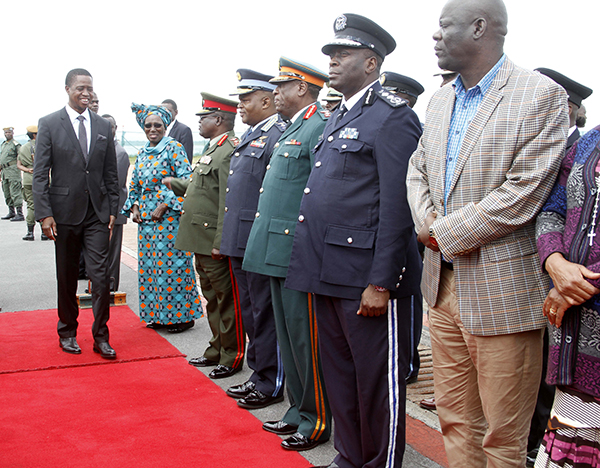 STEVEN MVULA,  Lusaka
PRESIDENT Lungu says the media in Zambia will not be regulated as long as he remains head of State as he will allow it to operate freely in a responsible manner.

Commenting on commemoration of the World Press Freedom Day yesterday, President Lungu said: “If you want regulation, then regulate yourself. The State will not regulate the media.”
President Lungu urged the media to “speak to itself” because it is part of society as it is the fourth estate.
The head of State said this at Kenneth Kaunda International Airport shortly before he left for South Africa where he is attending the World Economic Forum in Durban.
He said the media needs to have introspection and reflection, or it will lose its role and relevance as the watchdog and fourth estate.
“The media, don’t take sides, be neutral. Tell us when we are wrong and, above all, be friendly to us. Those who oppose us and those who are with us, just articulate your views in an objective manner. At the end of the day, we will all benefit from your co-operation,” President Lungu said.
He said if the media becomes a whipping stick, even issues which are not supposed to divide the nation will do so.
“So unite us, criticise us and applaud us when need be. Zambia will give you free space to operate,” the President said.
Meanwhile, President Lungu says Zambia has to position itself strategically in the region so that it competes favourably and reap economic benefits.
President Lungu said Africa is the place to be in terms of economic growth but there is stiff competition, hence the need to compare notes with other countries in the region.
He said the best practices will attract and invite more investment into the country, and the more Africans meet, the more they will create opportunities for themselves.
“Zambia has to place itself, position itself, speak out and show itself. If the President is staying at home all the time, he cannot speak to the rest of the people in the neighbourhood, then Zambia will sink. In the end, they will not even know we exist,” he said.
The President said there are a lot of issues pertaining to economic growth, the environment in which the investment is and a whole lot of other aspects that come into play when leaders in the region meet.
“It is a regional issue, for us SADC is one. And if you come to Zambia, you will have come to South Africa, if you come to Zimbabwe, you will have come to Angola. So, the more we meet at that level, even globally we will be able to say this is what we should be doing as a region, as Africa, as the world,” he said.