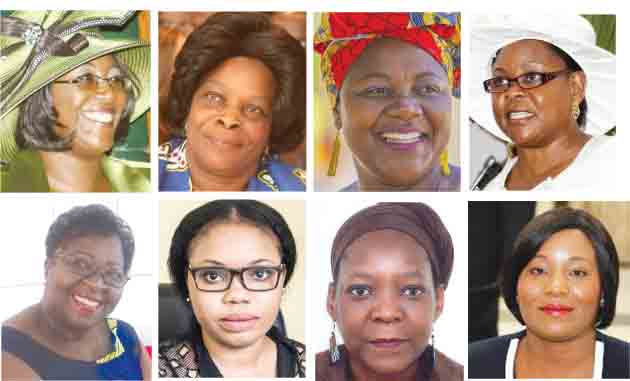 ENCUMBERED by stereotypes and cultural barriers, Zambian women, like in other parts of the world, have for a long time assumed the background role.
It was culturally accepted that women could not take up leadership roles.
As far as society was concerned, the role of women was merely to offer support to men.
This is despite women possessing valuable skills which could impact national development and beyond.
It is however heartening that due to a lot of enlightenment and advocacy over the years, the glass ceiling is breaking with more women assuming leadership positions including in male-dominated spaces.
Zambia under the leadership of President Edgar Lungu has made landmark gender strides with the appointment-cum-election of the first female Vice-President in the country’s 54 years history as one of them.
It is also under the leadership of President Lungu that we have seen the appointment of a female Director of Public Prosecutions.
Zambia also boasts of a female Chief Justice, Minister of Finance, Government Spokesperson, Deputy Speaker of the National Assembly and cabinet ministers, among many others.
While as a country we may not have attained the SADC Protocol on Gender and Development target of 50 percent women in political and decision-making positions, we certainly have the political will and headed in the right direction.
Just yesterday President Lungu swore in Monde Gwaba as Senior Private Secretary in the Office of the Vice-President, Martha Mwitumwa as Ambassador and Permanent Representative to the United Nations in Geneva, Switzerland, and Esther Nkandu as Ambassador to Belgium.
The continued appointment of women to decision-making positions at different levels is a clear demonstration of the President’s commitment to close up the gender gap and attain the 50 percent representation.
It is also evident that the Head of State has confidence in the capabilities of women.
While it is commendable that President Lungu has shown confidence in women, they need to prove that they are worth the appointments.
As rightly observed by the Head of State, his expectations and of many Zambians are very high.
Women need to prove that they are vying for decision-making positions not on the basis of their gender but because they are as capable as their male counterparts.
Those who have been given the privilege to serve in decision-making positions have a responsibility to justify why more women should be appointed to such positions.
As pace-setters, depending on how they perform in these offices, they have potential to open or close doors for other women.
This is more so because despite the strides made against gender stereotyping, there are still people who have no confidence in the capabilities of women.
It is however inspiring that Mr Lungu is leading the way in demonstrating that women are as capable as men.
“I don’t want to receive reports saying ‘look at the women you appointed; they are failing’.
“These appointments have been made on merit and are a clear demonstration that the PF government is determined to achieve gender equity in decision-making positions,” he said.
The President’s decision to appoint women in decision-making positions means he has seen abilities in them and is convinced that they can deliver on his and the nation’s expectations.
The appointed women should work extra hard to ensure that they do not betray the confidence of the appointing authority and the women-folk at large.
We also expect all women to support those who have been privileged to serve in high positions.
This is because their success is every woman’s success and vice versa.
Instead of pulling each other down, women will do well to work together to ensure that those that have been appointed represent them well.
This is a sure way of silencing sceptics of women’s capabilities and subsequently opening doors of opportunities for more women.

Let’s have civility in politics
Abolishment of meal allowances inevitable