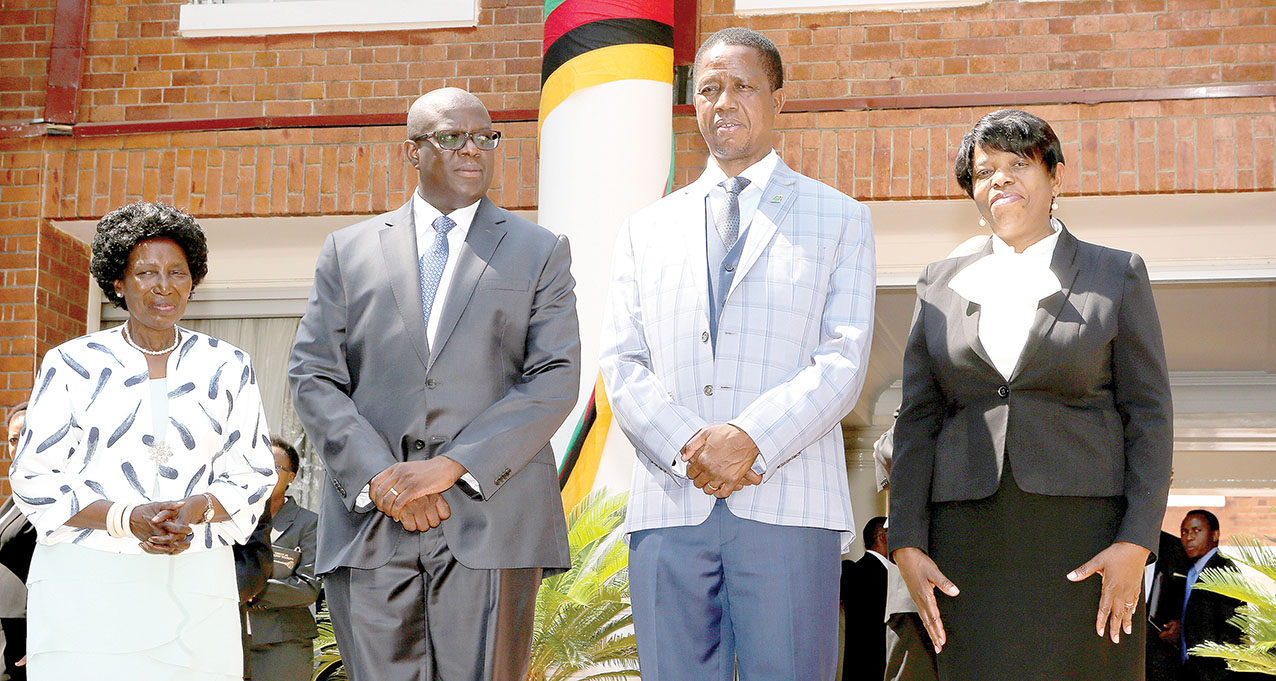 BY VIRTUE of his office, President Lungu goes through so much criticism probably more than any other public office-holder in the country.

While for some, criticism breeds resentment, for President Lungu criticism has bred much wisdom.
This is the wisdom he chose to share with the newly-appointed Clerk of the National Assembly Cecilia Mbewe and Anti-Corruption Commission Director General Kapetwa Phiri.
During a swearing-in ceremony in Lusaka yesterday, President Lungu urged the duo to embrace criticism.
“I have an important message for you – criticism. When people talk about you as Clerk of the National Assembly or as the man in charge of the fight against corruption, listen. There is no harm in listening to what people are saying against you,” President Lungu said.
President Lungu said he and the Vice-President are criticised daily.
Many leaders will attest that criticism is their daily bread.
This is because like pain, criticism is unavoidable much more for those in positions of leadership.
Former British Prime Minister Winston Churchill said criticism may not be agreeable, but it is necessary. It fulfils the same function as pain in the human body. It calls attention to an unhealthy state of things.
While the temptation for many is to resent criticism, many great leaders understand that it is what makes them stronger and better.
This is what we expect the new ACC DG and Clerk of the National Assembly to embrace in the execution of their new duties.
This is because criticism points one to areas that need attention thereby increasing the probability of success.
American writer Elbert Hubbard said, “The final proof of greatness lies in being able to endure criticism without resentment.”
Yes, in most instances criticism can be painful because it is delivered as raw and undesirable.
But no matter how undesirable criticism may be, a leader must be ready to listen and evaluate for possible lessons.
Former British Prime Minister Gordon Brown said, “When people criticise you, you’ve got to listen to that criticism, and to learn from it, which I’ve tried to do.”
In tandem with President Lungu’s counsel to the newly-appointed ACC DG and Clerk of the National Assembly, those vested with leadership positions should be ready to listen to criticism.
This is because not all criticism is bad. Leaders should, in particular, look out for constructive criticism which seeks to make them better.
As the head of State rightly pointed out, people will always criticise those in public offices, including making comparisons with those who previously served.
It is, however, up to the individuals to distinguish between constructive and destructive criticism.
It is indisputable that through his tenure, President Lungu has done exceptionally well and shown the way on how to handle both constructive and destructive criticism.
He is therefore better placed to counsel new and indeed other leaders on how to handle criticism without becoming resentful.
While President Lungu’s counsel may have been directed at the new appointees, other leaders in corporate organisations, political parties, churches and civil society, among others, can also draw valuable lessons for effective leadership.
Leaders can particularly draw from President Lungu’s wisdom on his ability to remain focused amid negative criticism.
The reality is that today we have so many armchair critics driven by selfish agendas to distract those in authority.
However, great leadership lies in being able to differentiate between constructive and destructive criticism. Leaders should be able to discard any unhelpful criticism and embrace constructive criticism.
Leaders should indeed heed President Lungu’s counsel when he says: “… What you should seek is the spirit of discernment. So that you can appreciate that this criticism is coming from a patient of verbal diarrhoea. This criticism is coming from a person charged with sour grapes, trying to settle scores; I will not listen to it. This criticism is objective. Let me put it on my table and reflect on it. That is what I do on a daily basis”.
It is not debatable that if leaders are able to discern the motivating factor behind some critics, they would be saved from unnecessary heartaches and distraction that has relegated many to the pit of failure.

Credibility should stay in exam system