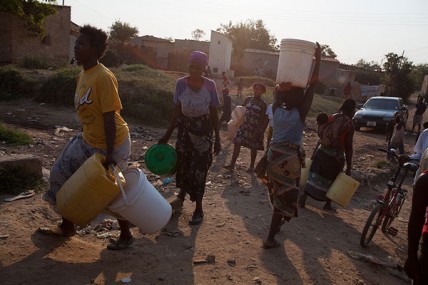 By STEVEN MVULA
MALOLE member of Parliament (MP) Christopher Yaluma has appealed to Chambeshi Water and Sewerage Company (CWSC) to resolve the acute shortage of water that has hit Mungwi district.
Mr Yaluma is concerned that Mungwi Secondary School faces imminent closure due to poor sanitation as a result of the shortage of water.
â€œThere is a serious problem in Mungwi. There has been no water for some time now and this is posing a health hazard,â€ he said
Mr Yaluma, who is also Minister of Mines, Energy and Water Development, said he is concerned that there might be an outbreak of waterborne diseases if water supply is not restoredÂ  to Mungwi district.
â€œI am trying to go there (Mungwi) and see what best can be done. The demand for water in the area has grown but there has not been any improvement to the infrastructure,â€ he said.
Mr Yaluma said despite several calls to the water utility to restore water supply to Mungwi, nothing has been done to date.
â€œI have written several letters to have the water reticulation put in place but to no avail. The last time water infrastructure was attended to was in 1958,â€ Mr Yaluma said.
But CWSC has explained that two main water pipes that supply water to Mungwi had burst and have since been repaired.
CWSC statutory manager Annott Chilwesa said Mungwi Secondary School has no infrastructure or pipes for water supply
â€œWe have a detailed report on the school and we have advised them what to do. Our mandate ends at connections including Government institutions,â€ Mr Chilwesa said
And CWSC technical director Willard Mutoka said Mungwi Secondary School has a â€œserious problemâ€ because its water infrastructure is non-existent.
â€œEven if we supply them with water, it does not last because pipes do not exist,â€ Mr Mutoka said.
The National Water Supply and Sanitation Council (NWASCO) public relations manager Rose Tembo also confirmed that Mungwi Secondary School has serious infrastructure problems.
Ms Tembo said NWASCO is aware of the challenges at the institution and hopes that they will soon be solved.