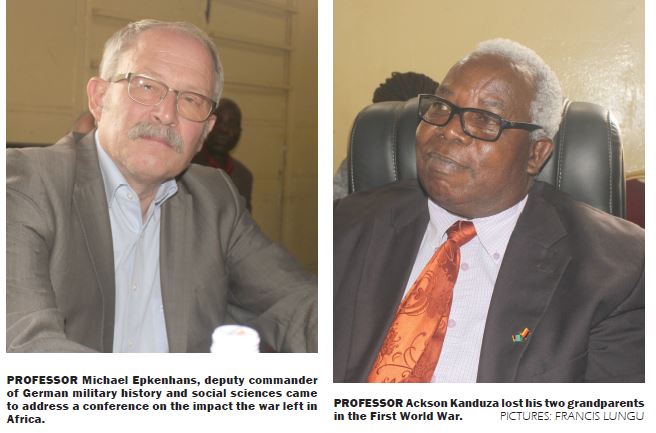 FRANCIS LUNGU, Mbala
TODAY marks exactly 100 years since last gun shots were fired in Mbala and an armistice declared between the British armies and the defeated Germany troops signifying the end of the First World War.
The centenary commemorations for the end of the war which was finally done in Abercorn, now Mbala, on November 25, 1918, have been characterized by exhibitions of the war memorial sites and pictorial evidence of what happened during the four-year battle.
But for 71-year-old Ackson Kanduza, the 100 years brings him painful memories and emotions at the thought of having lost two of his grandparents in that war.
Kanduza, now a Professor of English and Education at the Zambian Open University, says the war denied him an opportunity to see his grandfather, who died together with his brother fighting for the British in a war that was not even theirs.
African families were depleted, suffering increased as most men taken to join the war that went on from 1914 to 1918, died, just like Prof Kanduza’s case, who was born 29 years after the war but without seeing his grandfather.
“The pain comes in the fact that it was not our war. We were lied to believe it was a good course in which we should participate, and then in the end, the compensation for it was either not there or extremely inadequate,” Prof Kanduza said.
He feels injustices have continued as other European countries are being compensated to date by German while there is nothing for Africans.
“For example, Greece received its last compensation (from Germany on November 19, 2018) for the damages caused to it during the First World War,” he said.
Additionally, Prof Kanduza said: “A search for justice is key to human experience. We should continue to strive on how we can derive justice from the First World War.”
The injustices by the colonial masters on Africans during and post war era, has made the present German Government to acknowledge that bitter lessons were learnt and that Africans should be treated with equality.
To this effect, the German Embassy in Lusaka invited Professor Michael Epkenhans, deputy commander of German military history and social sciences to address a conference on November 23, 2018 at Mbala secondary school ahead of the 100 years anniversary.
Prof Epkenhans felt the First World War provided many lessons as regards to injustices and inequalities that Africans suffered at the hands of their colonisers.
“We should learn from history, especially the history of the First World War of our colonial past, we should draw lessons from it and that we should treat Africans as equal partners,” he said in interview after addressing hundreds of people, mainly students and their teachers on a topic: “Fighting for the Kaiser in Africa: the Great War and its impact upon a distant continent and its people.”
Prof Epkenhans, who was coming to Africa for the first time, said Europe should lead in finding solutions to address the impact the war left on the innocent African people
The conference was moderated by Prof Bizeck Phiri, a historian from the University of Zambia.
Government through the Northern Province administration cleverly thought of maximizing the war commemorations by staging an Investment Expo themed “Unlocking the Investment potential of Northern Province 100 years after the end of the First World War,” alongside the centenary activities.
The Northern Province Investment Expo had received US$5billion investment pledges, way above the initial investment projection of US$2billion.
The number of delegates doubled to 2, 000 from the estimated 1, 000 and 30 foreign countries were presented.
The centenary commemorations kick-started with a dummy procession on November 20, 2018 from Chambeshi River banks in Kasama at a National Monument in honour of German commander General Paul Emil von Lettow-Vorbeck who surrendered to the British and marched 169km to Mbala, via Kasama for a final armistice on November 25, 1918.
As the procession by the Zambia Army renaissance of the end of the war passed through Kasama, business in the area came to a standstill as people marveled at the war rugged dressed soldiers, of course aided with armored vehicles [which were not there during the war] continued with the procession.
But the question many have been asking is. why and how did a world war end in Mbala, Northern Rhodesia, when it was purely a European war?
Now, note that the First World War indeed originally broke out in Europe after the murder of Archduke Francis Ferdinand of Austria-Hungary by a Serbian national.
This culminated into the declaration of war by Austria-Hungary on Serbia on July 28, 1914, affecting most parts of Europe and Russia in Asia before it eventually spread to the colonies in Africa.
When the war started in Europe, Britain and Germany had already taken parts of African territories as their colonies.
Mbala was at the time a central route for slave trade and up further north was Tanzania which was under German colonial rule and the British-controlled Northern Rhodesia, now Zambia.
So the battle in Mbala and the surrounding areas between Britain and Germany was mainly for territorial protection and supremacy.
The centenary commemorations and the Investment Expo have been graced by President Edgar Lungu, Northern Province minister Brian Mundubile and his permanent secretary Elias Kamanga, several senior government officials among other dignitaries.
The British government and the royal family assigned the Duke of York Prince Andrew, who is the Grand President of the Royal Services League, to be part of the historic events.
According to the programme, Prince Andrew is also scheduled to meet 17 surviving Second World War veterans and discuss ways of how to help them and their families.
Zambia has attracted the world and history has been re-written for the whole universe to acknowledge the role Africans played in a war that was not theirs and whose last shot was fired in Mbala.

What should be age for political youth leaders?