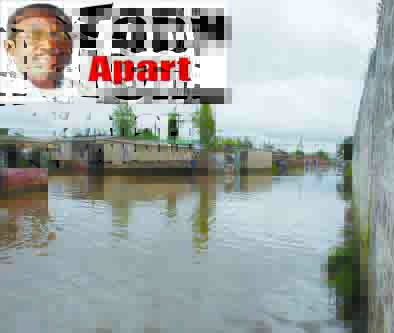 TORN APART witH BOYD PHIRI
ITâ€™S been raining cats and dogs of late in the hood, perhaps just like the Zambia Meteorological Department (ZMD) predicted that the country would receive normal to above normal rainfall for the 2016/17 rainy season.
Of course, ZMD acting director Joseph Kanyanga is not a magician or fortune teller, but you can count on his knowledge about weather, not cats and dogs.
Well, perhaps this is the time when cats and dogs work together for the common good, which is falling down as heavy rain.
Obviously, as people in the hood continue to throw around the catchphrase â€œraining cats and dogsâ€, many areas are increasingly getting flooded and muddy.
I bet Dr Kanyanga and his team at ZMD are saying, â€œwalila mvula walila matope,â€ meaning â€œHe who cries for the rain should never grumble about the mudâ€.
But as much as people in the hood might moan and groan about the inconvenience of rain and mud, they all know that they need water for their crops and electricity generation in dams.
Many parts of the city of Lusaka have been flooded, and as predicted, we will continue experiencing flash floods.
Needless to say, it is not a bad idea to bring along your canoe to work just in case your parking lot gets flooded.
I am thinking of acquiring a canoe because the road leading to my workplace gets flooded each time it rains cats and dogs. We call it Longolongo River because Longolongo Road goes underwater after a downpour.
Parking your car on the roadside means wading through the knee-high water after a heavy downpour, just like it is when getting to a flooded pit-latrine in the hood.
Of course, nobody wants to be inconvenienced by the dictates of wet weather, but the fact is, when the entire hood becomes muddy, only the agile manage to leapfrog puddles when they venture out after the rains subside.
If you see me in the middle of the street jumping over mud puddles in succession like an Olympic-level hurdler one of these days, donâ€™t think I am preparing for the next Olympic Games.
You see, you need to assume the agility of a 100-metre hurdler if you want to cope with the effects of wet weather in the hood.
Nothing exciting about rain in the hood, especially that you need a raincoat or umbrella when answering the call of nature in a roofless communal pit-latrine.
If you see umbrellas hanging on top of ramshackle pit-latrines, just know that itâ€™s time the hood considered using portable toilets from Andrew Kurt this rainy season.
The sad part is that once youâ€™ve sneaked into the isolated loo in the backyard, you have to be careful that the poorly built toilet does not collapse while you are inside after a downpour.
This is the time when business goes down for sex workers who ply their trade on the streets at night, and I am sure call girls donâ€™t like it when it rains cats and dogs at night. Who would brave the rains to fetch a sex worker on the streets?
Perhaps some bachelors in the hood would be more than happy to receive normal to above normal rainfall.
This is the time when the benefit of rain beats the inconvenience of mud among some bachelors, I mean, how else do you think a bachelor would ensure that water is available in his home?
In the hood, bachelorhood for guys who are always out at work is a challenge, especially when it comes to drawing water from communal taps.
With the likelihood of the country receiving normal-to-above-normal rainfall during the 2016/2017 rainy season, bachelors in the hood would be more than happy to harvest rain water again than queue at communal taps.
It may surprise you to know that many single men in the hood feel shy to draw water at communal taps, where there are so many women, especially girls still in the shadows of spinsterhood.
In all seriousness, though, aside from all the challenges of drawing water from communal taps, being a single man in the hood attracts stereotypes.
You would hear women talking â€œbamuna aba batapa beka manzi, balibe bakazi?â€ they would gossip, meaning â€œHow come this man draws water alone, doesnâ€™t he have a wife?
This is the reason why bachelors in the hood would rather be happy to harvest rain water in buckets to avoid such gossip at communal taps than grumble about mud.
On the one hand, they would probably get soaked in the expression saying â€œLet it rain cats and dogsâ€.
bjboydphiri@yahoo.com