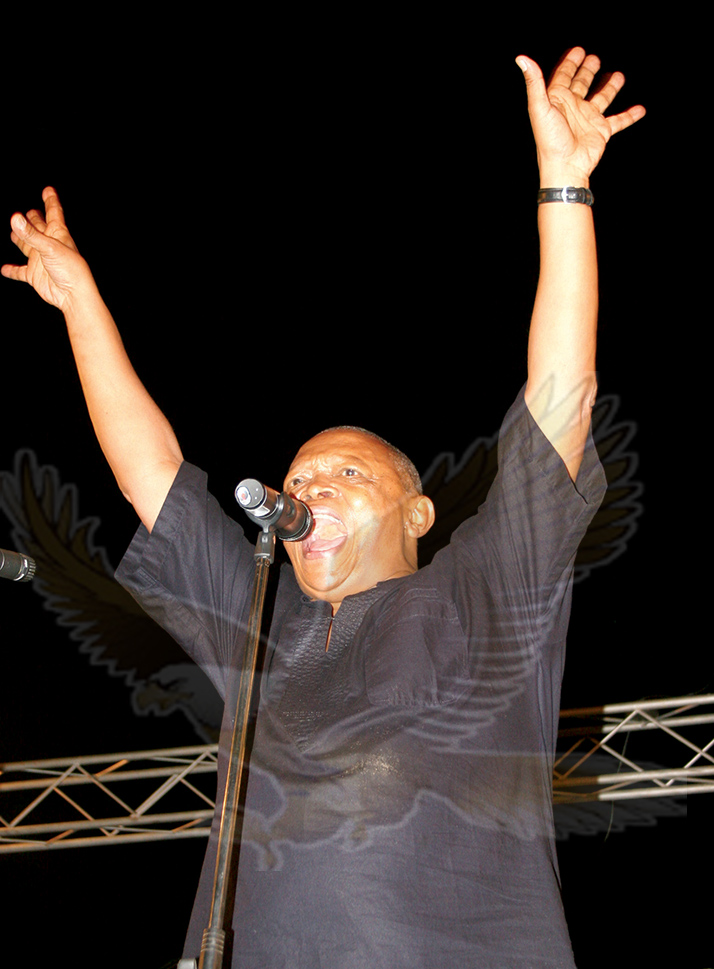 NKOLE NKOLE, Lusaka
A LOT of people world-over have been sharing their memories of South African legendary trumpeter and singer-songwriter Hugh Masekela who was a propulsive force in jazz in South Africa since his death filtered through on Tuesday.

Anyone who knows a thing or two about music or indeed the struggle against apartheid knows who Masekela is.
He is certainly no stranger to the Zambian scene.
His last memorable performance here was at inaugural Stanbic Misty Jazz Music Festival at Levy Business Park in Lusaka where he was the headlining act alongside Zimbabwean legend Oliver Mtukudzi.
This writer, who attended the inaugural two-day festival in September 2014, remembers Masekela’s performance like it happened a while ago.
She can recount it.
The night the South African jazz legend performed for the last time in Zambia in September 2014, magic happened on stage; Mtukudzi joined him and the two legends were nothing but electric.
It was the first time he was visiting Zambia after six years; a country he regarded as his home and which he visited regularly during the apartheid era. His sister had attended university in Zambia and worked for the African National Congress (ANC), which was headquartered here after the South African apartheid regime banned it in that country.
That night in September 2014, the afro music greats won the affection of more than 2, 000 fans at the first-ever Stanbic Misty Jazz Festival in Lusaka, which has been christened to just Stanbic Music Festival now and has been headlined by the likes of Boyz II Men.
But nothing beats the inaugural festival, not even the follow-up which had Earl Klugh and Mtukudzi or the subsequent one featuring UB40.
The organisers, Stanbic Bank, may not admit it, but they certainly know that it was the best.
“He was our very first headline act and as always, he did not disappoint. He was the embodiment of energy, passion, talent, showmanship, professionalism and African pride. He graced stages around the globe and performed to millions over his long and illustrious career,” the Stanbic Music Festival posted on their official Facebook page.
“He was genuinely and undeniably musical royalty and we had the privilege of basking in the glow of his amazing gift. We will fondly remember his mind-blowing repertoire that we grew to love. We sang along to hits like Chileshe, Bring Him Back Home and Been Such a Long Time Gone.
“Who can ever forget how he reminded us of his fellow legend Fela Kuti with his foot stomping rendition of Lady. The Stimela has pulled into its final station. We will always celebrate this ambassador of African music.”
The festival was unveiled initially under a jazz tag, and Masekela or Bra Hugh, was the first choice performer for the festival’s opening night. Truly, there could not have been a more apt headliner.
And so that night, Bra Hugh emerged onto the stage for an unforgettable show.
Both Masekela and Tuku proved unmatched and ageless performers whose music has endured through time.
As he strummed his semi-acoustic guitar, Tuku who appeared first on stage, simultaneously introduced Bra Hugh to the transfixed crowd.
“A friend of mine,” Tuku began, “A good friend, without him I can’t sing this song…” But midsentence, fans were already screaming in anticipation.
With Bra Hugh on his trademark trumpet and Tuku on the semi-acoustic guitar, the duo delivered a sensational performance of Tuku’s song, Tapera.
This was followed soon after by the pair’s performance of one of Tuku’s greatest hits, Todii (what shall we do.)
Tuku’s time on stage that night was brief in order not to steal the spotlight from the show’s main attraction, Bra Hugh.
Serenading the night with the sound of his trumpet which pierced through the September night, Bra Hugh began by thanking Zambia for its generosity and remarked at how it was an honour to be at the festival.
The lively African legend acknowledged Zambia’s contribution to South Africa’s liberation struggle and praised her peaceful atmosphere.
An anti-apartheid campaigner, Bra Hugh had used his music to tell stories of the fight for freedom by black South Africans like himself. His song, Khawuleza, for instance, is about apartheid police raids at illegal shebeens in townships.
That night in September, in Lusaka, he carried gratitude in his bosom.
“On behalf of those who have not said thank you yet for what Zambia did, I just wanna say zikomo. This is the safest place in the world,” Bra Hugh said to the cheering crowd.
His performance that night was on occasion punctuated by his characteristic humour and by a display that age had not robbed his limbs of their agility.
Willing his legs and knees in a butterfly dance, Bra Hugh jived as the audience urged him on. And of course, the night would have been incomplete without his performance of the song, Chileshe which some of his fans regard as a gift and an expression of consciousness and courage.
His windpipe allowing, Bra Hugh blew his trumpet to release a sound so soothing, it found a ready home in the hearts of his Zambian fans as did the Masekela hit, Marketplace.
Bra Hugh and his five-man band locked arms at the end of the show and took a final bow before leaving the stage.
That marked his farewell to Zambia. And now, to the world.
But his music lives on. That is why they say, an artiste never dies. Hugh Masekela was a true artiste with his trumpet.