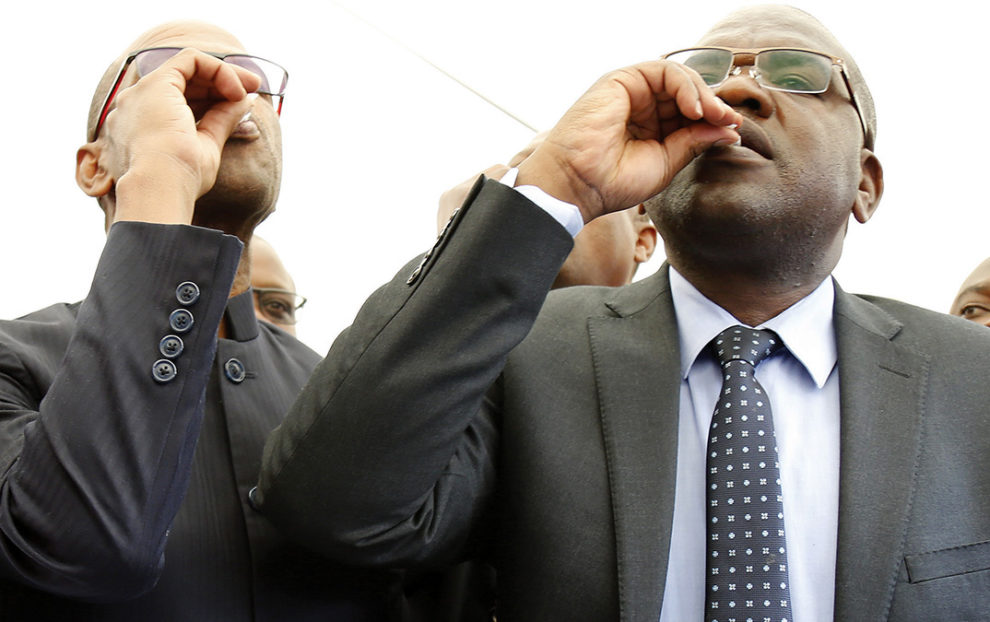 The long queue of people at the vaccination centre does not discourage Ms Wakumelo, who has witnessed many people in her area die of the disease.
“I am here to receive the vaccine in the hope that it will protect me from cholera. The many people that have died in my community is evidence enough the disease is fatal, hence the need to protect myself” Ms Wakumelo said.
Another Kanyama resident, Milner Mudenda, 23, had just been inoculated against cholera, and was happy that he did.
“I was advised to continue practising good hygiene because the vaccine is only going to help prevent the disease. It is not an alternative for good hygiene,” Mr Mudenda said.
Mr Mudenda said the fight against cholera needs the participation of all people for Zambia to win the battle against the disease.
Many people that turned up at Mutandabantu grounds to receive the cholera vaccine were going back home with the message that they should observe hygiene at all times.
A handful of people interviewed, believe that the cholera vaccine provides immediate immunity from the acute diarrhoeal infection caused by ingestion of food or water contaminated with the bacterium vibrio cholera.
Since the outbreak of the disease on October 4, 2017, over 3,148 cases have been recorded nationwide, with about 72 deaths.
Authorities had banned some street markets in an effort to reduce the volume of food and drinks being sold in unsanitary open-air locations, which are conducive to contamination of commodities with cholera germs.
Government, through the support of cooperating partners, has embarked on the vaccination of people in cholera epicentres in Lusaka to stop the spread of the disease.
The cholera vaccination exercise started in Kanyama township, and residents turned up in numbers to receive the OCV
This is a two-dose vaccine, meaning that each person needs to take it twice. In the cholera epicentres of Matero, Kanyama, Chawama and Mandevu, where people have been vaccinated, the recipients will get the second dose after 14 days.
Oral cholera vaccines are safe, effective and acceptable. They present an additional tool for cholera control to supplement, but do not replace existing priority cholera measures.
Health Minister Chitalu Chilufya, who launched the OCV, appealed to the public to continue observing good sanitary hygiene, including the practice of washing hands.
“You should not ignore basic preventive measures because the key drivers of this epidemic are consumption of contaminated water and food, poor waste management and poor personal hygiene practices, which have to change,” Dr Chilufya said.
He said the cholera vaccine reduces the risk of one getting sick with or dying of cholera, but it should be used as part of the integrated control strategy.
Dr Chilufya administered the first vaccine to a mother and her two children after he took the dose as an example to the people that the OCV is safe.
While the long-term solution for the prevention of cholera remains access to safe water, hygiene promotion and sanitation, the oral cholera vaccine can play an important role in outbreak prevention and control.
The World Health Organisation (WHO) is working with Zambia National Public Health Institute (ZNPHI) to address the underlying cause of the cholera outbreak.
It is also helping authorities to track down cholera cases, treat patients and provide community health education.
“Zambia is experiencing one of the worst outbreaks of cholera in years,” said Dr Nathan Bakyaita, WHO representative to Zambia during the launch of the campaign. “With this campaign, we can stop cholera in its tracks and prevent an even more devastating epidemic.”
The global organisation recommends that vaccination against cholera should be considered in emergencies and other high risk scenarios where there are increased threats of outbreaks, combined with standard prevention and control measures for the disease.
These measures include readiness to provide adequate testing and treatment, steps to ensure access to safe water and sanitation and community mobilisation to engage the public in preventing infection.
Kanyama Member of Parliament Elizabeth Phiri who is grateful to Government for its efforts in fighting the disease, is hopeful that her constituency will eradicate cholera.
About two million people in the epicentres are expected to be vaccinated during this period. Government is happy with the response from people since the vaccination campaign started last week Wednesday.
United Nations (UN) Resident Coordinator, Janet Rogan cautioned Kanyama residents not to relax with their hygiene after getting the vaccine.
“The UN is ready to work with the Government and community at large to fight cholera in Zambia,” she said.
She said the UN system will continue to help fight the epidemic adding that her organisation has so far provided two million quantities of chlorine and other mobilisation incentives.
With the measures Government has put in place to eradicate the disease, people like Ms Wakumelo and Mr Mudenda have hope of living in cholera free communities. But they, too, need to play a role by observing good practices of hygiene and keeping the environment clean.
Key facts about cholera
•Cholera is an acute diarrhoeal disease that can kill within hours if left untreated.
•Researchers have estimated that each year, there are 1.3 million to 4 million cases of cholera, and 21, 000 to 143,000 deaths worldwide due to cholera.
•Most of those infected will have no or mild symptoms and can be treated with oral rehydration solution.
• Severe cases will need rapid treatment with intravenous fluids and antibiotics.
•Provision of safe water and sanitation is critical to control the transmission of cholera and other water-borne diseases.
•Safe oral cholera vaccines should be used in conjunction with improvements in water and sanitation to control cholera outbreaks and for prevention in areas known to be high- risk centres for cholera.
•A global strategy on cholera control with a target to reduce by 90 percent was launched in 2017.

Tagsabout cholera to know vaccines What you need