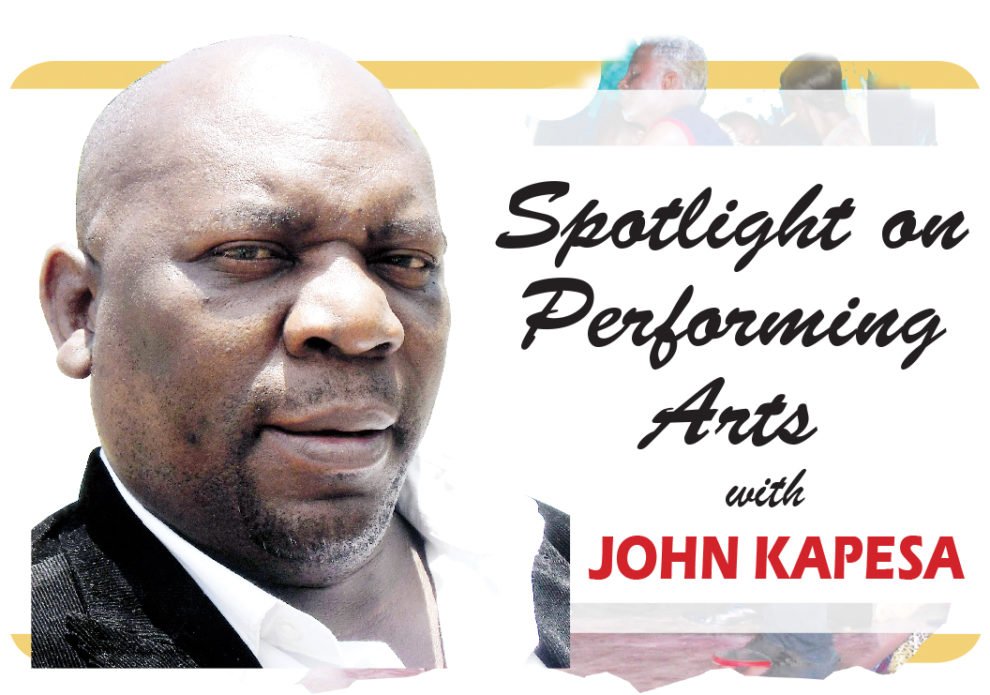 Spotlight on Performing Arts with JOHN KAPESA
YOUNG nations like Zambia require a history, a cultural history shared out in episodes, chapters, sections, parts, periods, phases or and units that talk about its people and culture, customs and traditions, practices and lifestyles.

This is more the reason ‘old’ countries like the United Kingdom relishes its historians, writers and playwrights among others that have contributed to fathom its culture and tradition.
Names like William Shakespeare, Bernard Shaw, and Arthur Williams among others have illustriously remained revered and remembered.
Resultantly, I want to recap on some of the hair-raising dramas we have had in Zambia.
I want to see if we can give the same reverie to our local playwrights particularly those that have dared on the political lines. While this has been healthy, on the African continent, the question has been whether this has been a really healthy adventure.
But unlike other countries, Zambia’s political atmosphere has been one of admirable peace and dialogue.
Notwithstanding that, there have been plays that have valiantly been staged in Zambia before that have offered their opinion, projection and good advice in an entertaining way for our political rulers.
This, for me, is very good.
However, political plays are only healthy in my view if they are objective, corrective and meaningful.
In the 70s, with Tikwiza Theatre, Masautso Phiri topped the list with his trilogy of Soweto Flowers Will Grow raising pertinent issues that fearlessly depicted the massacre of an uprising of 1976 in South Africa. The play had the involvement of the likes of Mumba Kapumpa, Matilda Malamamfumu and the late Edmond Ngula, courteously emulating world leaders like Margaret Thatcher, Kenneth Kaunda and Nelson Mandela.
In later years came Waiting for Sanctions, again by Phiri with another semblance theme on the struggle in Southern Africa.
Kabwe Kasoma penned the entertaining Black Mamba and then came Dead Roots by Cheela Chilala before Samuel Kasankha added two scripts Rulers of the Lost Continent.
Mabvuto Theatre of Mufulira staged Renutus Mushinge’s plays The Trials of Jerome Mbali and Africa the Land of Paradise another Mushinge-written play. The first play, The Trials of Jerome Mbali featured among others, Kelvin Fube Bwalya, popularly known as KBF, Kelly Chansa and Mumba Kabaso.
Graig Lungu’s A Second Before a Storm gave a fear of a country raved by war.
However, in later years after the late 80s, came plays like The Press by the late Chibale Kalaba, Make that Broom Sweep by the late Maurice Tembo and Wilbroad Sosa’s Jack in the Office.
Other plays have included Kiss the Hangman by John Ntulisha, the musical entitled Mawe by the late Kwaleyela Ikafa.
While these Zambian playwrights may not be the only ones with a chronicle account of usually inviolable grounds, my point is, playwrights tread the political lines tackling these themes with great fear perhaps because most lack exclusive information on political and economic matters.
Generally, the deliberate lack of policy that does not inspire the writing and reading of plays could be one reason. But this is subject for debate. The lack of publishing houses is one, just as roundly, schools have no record of idols in local theatre.
Playwrights must objectively be knowledgeable in economic matters as well as administration; hence, should give fair advice and counsel, be neutral in how they debate in their plays. They have an eternal and impartial role in shaping the destiny of their country as well supporting and documenting relevant themes; traditions, habits, lifestyles and practices for posterity.
John.kapesa818@yahoo. co.uk – 0955/0967/0977 – 710975

Nothing precious at Miss Intercontinental
Roberto gets another nomination