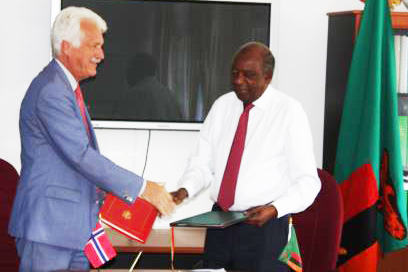 STEVEN MVULA, Lusaka
ZAMBIA has received â‚¬2.25million from the Nordic Development Fund (NDP) for climate-resilient rural water supply and sanitation in Western Province.
NDP country programme manager Charles Wetherill said his organisation has committed the â‚¬2.25m, over the next three years to supporting the development and integration of climate-resilient planning in Zambia.
This is according to a statement released yesterday by the Ministry of Finance.
â€œThe funds will go towards field testing and rolling out technologies for climate-proofing rural water supply and sanitation, with the aim of improving access to reliable services in as many as 80 communities in the rural water sector in the Western Province,â€ Mr Wetherill said.
Mr Wetherill said the project will also scale up the production and use of data and integrate it into water sector planning at national level.
Speaking at the same function, Minister of Finance Alexander Chikwanda said the project, which will be implemented by the Ministry of Local Government and Housing, complements the water and sanitation project, which the African Development Bank (AfDB) is financing in Western Province, under the umbrella of the National Rural Water Supply and Sanitation Programme Phase II.
â€œThis agreement with Nordic Development Fund represents a concrete commitment towards building a more climate-resilient economy in Zambia,â€ Mr Chikwanda said.
Mr Chikwanda said Government is indebted to the Nordic Development Fund, whose support since 1997 has amounted to over â‚¬30 million.
Nordic Development Fund is a joint development finance institution of Denmark, Finland, Iceland, Norway and Sweden.
Its mandate is to support innovative advances in climate change adaptation and mitigation in developing countries.