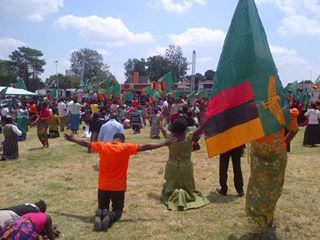 The violence that has continued escalating prior to the August 11, 2016 general elections has left many dumbfounded and desperate for a lasting solution.
Last Friday a life was lost when United Party for National Development supporters clashed with police over the cancellation of their rally in Lusakaâ€™s Chawama Township.
On a countless number of times we have heard of how political supporters have fallen victim of violence at the hands of their opponents.
It has also been reported on several occasions how cadres have been found with offensive weapons such as pangas, knives and even firearms in public, with obvious intentions of harming opponents.
The resolute stance by some politicians and indeed cadres to engage in violence regardless of the consequences defies human logic and effort.
For instance, despite the numerous arrests of some perpetrators of violence by the police, others have chosen not to take lessons from that.
President Lungu and other political leaders have strongly denounced and warned against political violence but people are still determined to commit the barbaric acts against their fellow human beings.
The church is also on record of having organised an indaba in a bid to end violence but to no avail.
The Electoral Commission of Zambia (ECZ) has been pushed to the limits thereby banning political campaigns in Lusaka and Namwala where violence was seemingly getting out of hand.
It is now evident that our human efforts are not yielding much result in ending political violence.
In a Christian nation like ours, it is therefore not only a sign of humility but wise for the Head of State to call for national prayers to seek Godâ€™s intervention.
The power of prayer is not only evident in the Bible but in our modern society. For instance, Britain was faced with a formidable advancing German army during the Second World War.
At the request of His Majesty King George VI, Britain observed a National Day of Prayer on Sunday May 26, 1940 to commit their cause to God. The whole nation prayed and God answered by halting Hitlerâ€™s general advance, causing a storm of extraordinary fury which grounded the German Air Force on May 28, and restoring calm over the English Channel allowing 335,000 men of the British army to be evacuated from Dunkirk.
The Bible in 2 Chronicles 7:14Â  states: â€œIf my people, which are called by my name, shall humble themselves, and pray, and seek my face, and turn from their wicked ways; then will I hear from heaven, and will forgive their sin, and will heal their land.â€
It is indisputable that the land of Zambia needs Godâ€™s healing from the plague of violence and bloodshed.
President Lungu being a man of faith knows the power of prayer.
Last year the Head of State led Zambians in national prayer and fasting on October 18, which he declared an annual event.
The prayers were organised to seek Godâ€™s intervention in challenges the country was faced with which included the electricity power deficit due low water levels in hydro-electricity power plants, falling value for the Kwacha and a then looming drought due to the El Nino.
True to Matthew 18:19 which states: â€œAgain I say to you that if two of you agree on earth concerning anything that they ask, it will be done for them by My Father in heaven. For where two or three are gathered together in My name, I am there in the midst of them,â€ the country miraculously recorded good rains and a bumper harvest.
This has led to increased water levels in our hydro-power plants thereby reducing the power deficit from a high of 1,000mw to 500mw.
Zambiaâ€™s surplus maize harvest for the 2015/2016 farming season defies the agriculture and climate expertsâ€™ warnings that southern African countries would face hunger due to drought.
President Lungu should therefore be supported by all peace-loving Zambians in a bid to allow Jesus Christ, who is the â€˜Prince of Peaceâ€™, to take centre stage over our nation.
We implore church mother bodies to take leadership and mobilise all churches for this important event.
We expect all politicians and citizens genuinely concerned about the continued violence in the country to support this noble cause.
Actually political leaders should encourage their supporters to be part of these prayers.
During prayers we need to ask God to forgive us for the blood shed due to political violence. We also need to ask God to restore love and respect for life among Zambians.