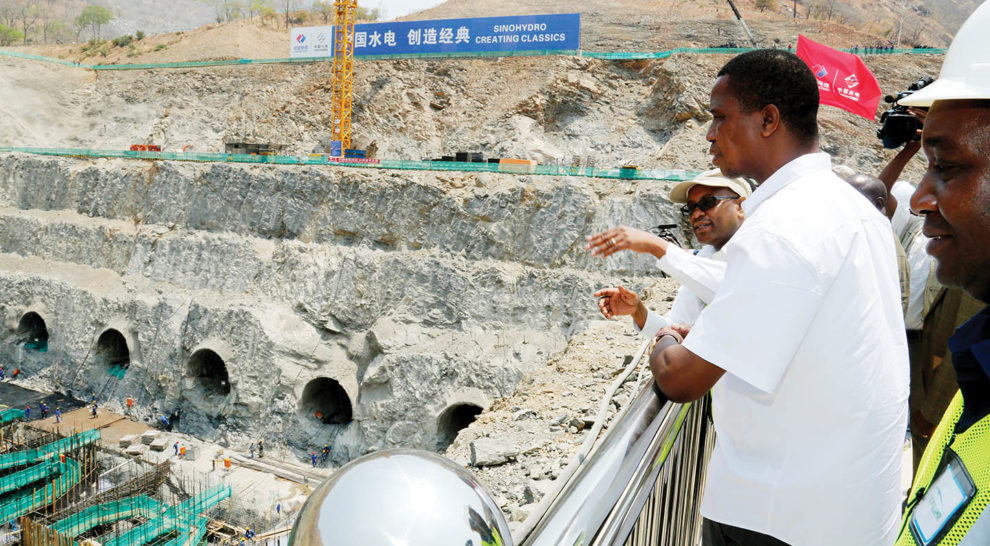 PRESIDENT Lungu has yet again demonstrated his commitment and eagerness to leave Zambia better than he found it. He travelled to Kafue Gorge Lower yesterday to ascertain progress and witness the diversion of the Kafue River in paving way for the construction of Zambia’s biggest hydropower project in 50 years.

It is irrefutable that President Lungu has proved to be a pragmatic leader who does not entirely rely on his officers to inform him on the progress of projects around the country. He has been proactive by making visits to project sites.
President Lungu’s presence at Kafue Gorge Lower project yesterday to witness the transitioning of the 750 megawatt power project to a new phase is evidence of his commitment to pushing infrastructure development across all sectors, with particular attention to hydropower where there has been a deficit.
For any country, power is the fuel that drives the economy without which no meaningful development can be realised.
Over the years the growing population and increased economic activities have pushed up the demand for power, putting immense pressure on the national grid.
The country plunged into a crisis in 2015 and part of 2016 when Zesco, the power utility company’s power generation capacity was reduced due to low water levels in the Kariba Dam forcing it to resort to power rationing.
During this period we saw how businesses – big and small – tumbled.
For instance, mines, which are major employers in Zambia’s labour market besides Government, experienced a sharp reduction in their production output due to power shortages, thereby leading to job cuts in the industry.
Besides that, we saw small companies struggle to survive while others folded up.
The impact of load shedding did not spare families, whose lives were also disrupted.
This only points to the critical role that power plays in our day to day lives. It is also an indication on the need to increase our power generation capacity to meet the growing demand locally and in the region.
It is for this reason that we commend Government for embarking on the construction of the US$2 billion hydropower project.
The four-year project which is being constructed by Sinohydro Corporation Limited is the largest single investment in the energy sector and is scheduled to be completed in 2020.
The project when completed will certainly be a leap towards the Patriotic Front government’s vision to make the country self-sufficient in power supply and have surplus for export.
This is much more so because the Kafue George Lower Power project comes barely a few months after Batoka Gorge project.
Given the growing demand for electricity in the Southern African Power Pool coupled with the massive investment in power generation capacity, Zambia will be better placed to become a power hub in the region.
Above all, the country will be able to rake in the much needed foreign exchange to propel economic development.