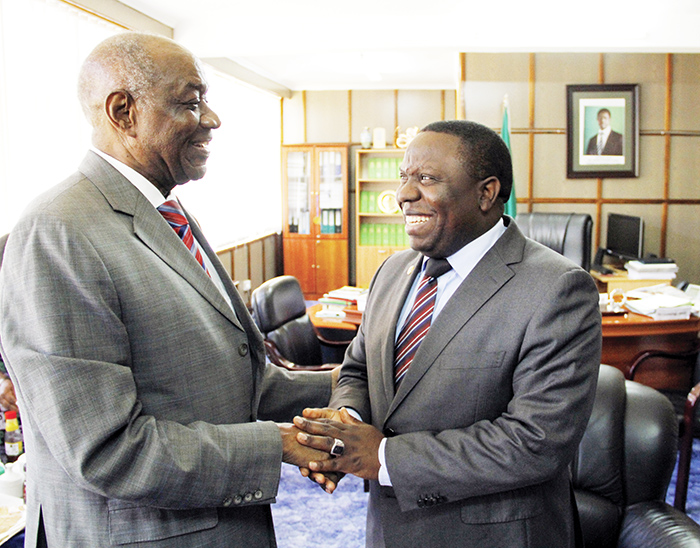 MACKSON WASAMUNU, Lusaka
VETERAN politician and accomplished diplomat Vernon Mwaanga has advised Zambians to give President Lungu unwavering support because he has the mandate to govern the country.
Dr Mwaanga encouraged President Lungu and his administration to continue with what he is doing because he has the mandate of the Zambian people.
He also commended Minister of Foreign Affairs Harry Kalaba for his efforts in projecting Zambiaâ€™s image on the world map.
Speaking when he paid a courtesy call on Mr Kalaba yesterday, Dr Mwaanga said President Lungu deserves the unfailing support of all Zambians because he is in charge at the moment.
â€œThrough you I want to encourage President Lungu to continue with what he is doing because he has got the mandate from the Zambian people to continue governing our country and he deserves the support from all of us.
â€œAt the moment, he deserves our unfailing support because there can only be one President at a time in Zambia, and he is President at the moment and he deserves our unfailing support,â€ he said.
Dr Mwaanga, who started his career in the Ministry of Foreign Affairs, also served as Minister of Foreign Affairs on two different occasions in the early 70s and in the 90s.
Dr Mwaanga said he has a very special passion and holds the ministry dearly and in very high esteem.
He said for him, Zambia comes first before everything else.
Dr Mwaanga said the Ministry of Foreign Affairs is important because it always sells the image of the country abroad.
â€œWe grew up during the period of growing nationalism. For us, whoever is in Government needs to be supported and encouraged and I have been following your work as Foreign Affairs Minister just like I have followed the works of your predecessors,â€ Dr Mwaanga said.
He said he has always taken the trouble to meet with ministers of Foreign Affairs to give them support by sharing ideas with them and to tell them that he is available should they need any advice inÂ  future.
And Mr Kalaba said Zambians have a lot to learn from politicians like Dr Mwaanga, who distinguishes politics from other issues that are not politically driven or politically motivated.
Mr Kalaba said it is humbling to receive people like Dr Mwaanga in his office and getting commendation from him.
â€œIt is important that we all rally behind the President and support him for him to achieve that for which he has been given the mandate. It is important for our country to be looked at from a correct perspective by other countries,â€ Mr Kalaba said.
He said President Lungu is a very precious asset in diplomacy because he serves as special envoy and the more he is celebrated, the more the country gets the credit that it needs to get.
He said citizens have a responsibility to project the correct impression both abroad and at home.
Mr Kalaba said issuing negative statements only impacts negatively on the countryâ€™s image.
He said, however, that it is gratifying that Zambia still has eminent and distinguished personalities like Dr Mwaanga who can say what Government is doing well.
Mr Kalaba said he feels very encouraged that Dr Mwaanga has shown a very high sense of patriotism for the country
The minister said he knows and believes that even President Lungu has been counting on people like Dr Mwaanga to continuously propagate Zambiaâ€™s foreign image.
â€œFor us in the ministry, we will continue counting on him and learn from his many years of experience. This gesture defies political barriers, this is what it means to be a patriot and it bridges the artificial gaps that exist.
â€œI want to thank our very distinguished diplomat, Honourable Mwaanga, I must say that in the field of diplomacy he has excelled beyond measure and we are very grateful, that he has found time to come here, extremely grateful and the issues he has referred to are very pertinent. There are issues that we have to interrogate fully as a ministry and as Government,â€ Mr Kalaba said.