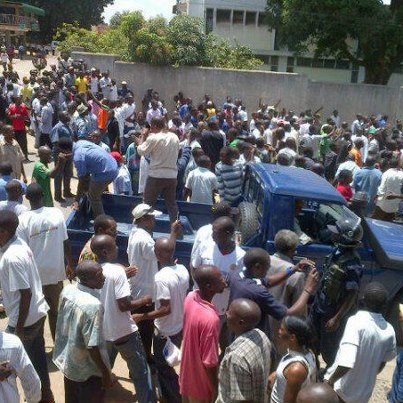 AS We head towards three parliamentary by-elections, violence has reared its ugly head once again in Mulobezi Constituency where there was a clash last weekend when some suspected United Party for National Development (UPND) allegedly attacked Patriotic Front cadres.
As Vice-President Inonge Wina stated, such politics belong to the stone age and they should not be allowed to prevail now.
We understand that emotions are charged now as politicians canvass for voters to cast ballots in their favour on June 30.
We think that violence, at a time like this, will not help to get the attention of voters and if anything, it is the least tactic that voters would like to see.
Violence, as a mode of garnering support, was best suited during the pre-independence era when the white supremacy stuck to power and devised all methods to prevent Zambians from taking hold of their destiny.
Now we are all Zambians and violence should be consigned to the colonial era where it belongs and the focus of every well-meaning Zambian should be on development.
While individuals belong to different political parties, we know that their manifestos seek the best for the country, that is, development, and this should be a unifying factor for politicians.
Campaign time affords political parties an opportunity to sell their manifestos and convince voters what they have in the offing for them once elected into power.
Engaging in violence at campaign time will only leave the warring factions with scars that will remain a constant reminder of that act.
We agree with Mrs Wina, who says Western Province is in need of development. It needs better roads, more schools, more health centres and other facilities that will help improve the quality of life of the people there.
The voters want to know how farming will be improved and what other opportunities are available for them to engage in money-making ventures.
And this is what the voters want to hear. They are eager to know how the one who takes over as their representative in Parliament will table these matters and lobby for support from government.
We, therefore, urge politicians from all parties to exercise restraint and co-exist as they sell their manifestos to the electorate.
We are aware of how long the three constituencies, Mulobezi, Petauke and Malambo, have had no representation in Parliament since their results were nullified by the court on account of malpractice in the 2011 tripartite elections.
Political leaders set the trend and any show of violence is bound to make voters lose confidence in an electoral system that promotes democracy.
We urge leaders of political parties participating in the by-elections to take control of their cadres and restrain those bent on violence from carrying it out.
We need to guard our democracy jealously and the power is in our hands to protect ourselves from tendencies like violence, which can destroy our democratic ideals.