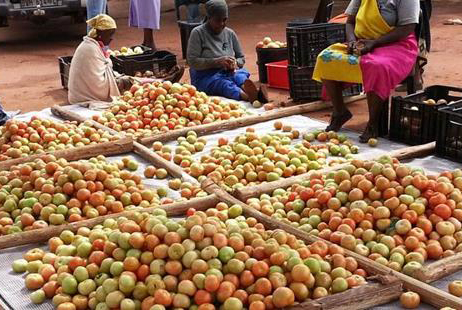 NANCY SIAME & KELVIN MBEWE, Lusaka
FARMERS and a civil society organisation have commended Government for banning the importation of some farm produce into Zambia as a way of promoting the growth of the agriculture sector.
The Zambia National Farmers Union (ZNFU) says the ban on the importation of some fruits and vegetables will contribute to making President Lunguâ€™s diversification agenda a reality.
ZNFU president Jervis Zimba said the ban would empower local farmers because they are capable of meeting local demand.
â€œWe are thankful and grateful to Government for listening to the cry of farmers to ban the importation of some fruits and vegetables. It is a bold decision and resonates very well with President Lungu, who is on record as saying agriculture should be a priority,â€ Mr Zimba said.
He said in an interview yesterday ZNFU will support farmers to ensure they produce the quantities of vegetables and fruits required to supply the market.
Mr Zimba dismissed claims by some chain stores that local suppliers are inconsistent.
And Born Short Living Tall (BSLT), an organisation which looks into the plight of the less-privileged, says the ban is a direct empowerment programme to the local agriculture industry and a giant step towards economic diversification.
BSLT executive director Ntalasha Chisha said in a statement yesterday the administrative measure would inspire young people, women and the disabled to engage in agriculture and create job opportunities for others.
â€œThe agriculture sector alone has the potential to create thousands of jobs if well-managed,â€ Pastor Chisha said.
He said it was such deliberate steps from policy-makers that his organisation was advocating and is delighted with the pronouncement.
He urged local farmers to prove the doubters wrong and work hard to constantly meet the demand of the chain stores.
Government recently announced the ban on the importation of some fruits and vegetables to promote production and grow the market for local farmers.
Ministry of Agriculture permanent secretary Julius Shawa named the banned agricultural produce as tomatoes, onions, pineapples, lemons, carrots, mangoes, and watermelons.