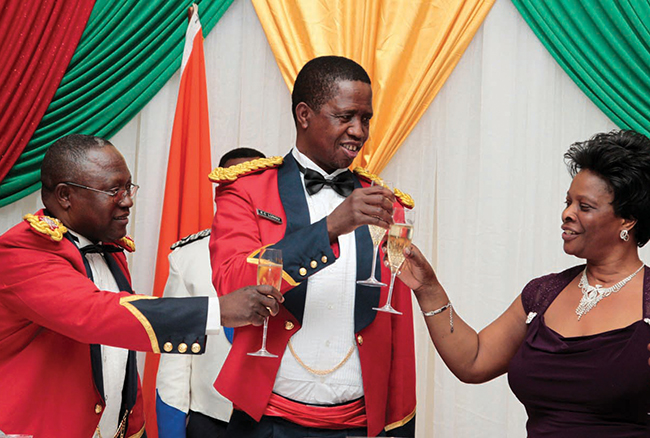 KELVIN CHONGO, Lusaka
PRESIDENT Lungu says 2016 will be crucial being an election year and has urged defence forces to work harder in maintaining peace in Zambia and to remain non-partisan and professional in their duties.
The President has also urged the defence forces not to allow themselves to be used by anyone with intentions to get power illegally.
â€œDo not allow yourselves to be used by elements with intentions to get to power through illegal or dubious means. We are a peace-loving nation, hence the need to cherish and uphold this,â€ he said.
Speaking on Thursday night during the Zambia Army annual ball at Arakan Barracks in Lusaka, President Lungu reiterated that the role of the army this year will be very cardinal.
â€œI wish to remind you that the New Year will be crucial as we hold the general elections. As your commander-in-chief, I expect you to work even harder to maintain peace,â€ he said.
President Lungu said the defence forces owe loyalty to Zambians and that the challenge ahead of them is to remain professional, non-partisan, and loyal to the people, the constitution and the government of the day.
President Lungu said Zambia is a peace-loving nation, a tradition that should be cherished by all.
He also paid tribute to the defence forces for maintaining peace not just in the country but in Africa as well.
He said Government is aware of challenges facing the Zambia Army and emphasised that his administration has started the procurement of modern equipment for the military.
President Lungu also urged the military personnel to play their part in fighting gender-based violence.
And Zambia Army Commander Lieutenant General Paul Mihova said the army would always support the government of the day.
Gen Mihova also warned officers and soldiers that anyone interested in politics would be asked to resign so that they could join politics.
The army commander also welcomed the launch of the Special Forces 48 marine unit aimed at protecting the countryâ€™s water bodies.
Gen Mihova also said Zambia Army has procured engineering equipment to enable it to construct roads and bridges this year.
He appealed for rehabilitation and fencing off of cantonments in various parts of the country.
President Lungu and senior army officers were treated to a spectacular fireworks display at the turn of the year.
Meanwhile, the Zambia Air Force (ZAF) says it is capable of responding to the air power needs of the country because of continued commitment from the government that has made the establishment stable and up to date with technology, KELVIN MBEWE Lusaka.
ZAF air defence commander Brigadier General Jabes Zulu said this at the station officersâ€™ annual ball on New Yearâ€™s eve.
He said ZAF has been able to acquire new aircrafts and air defence equipment which will assist in providing air mobility for developmental purposes.
â€œOur government has continued to help us modernise by acquiring new assets.These additions to our aircraft equipment have made it possible to reach out to far-flung areas without problems,â€ Gen Zulu said.
He also thanked Government for providing houses to ZAF personnel, a gesture that has boosted their morale.
â€œI wish to mention that the housing project at ZAF Twin Palm is a morale-booster to our personnel who, for a long time, had been subjected to unnecessary evictions from rented houses,â€ he said.
Gen Zulu also said ZAF has enhanced regional integration to promote world peace by contributing personnel that have been deployed in various African countries such as Sudan, the Democratic Republic of Congo and Central African Republic, among others.
Grandeur characterised President Lunguâ€™s entry into 2016 at Arakan Barracks in Lusaka in the early hours of yesterday, STEVEN MVULA reports.
Ten minutes before midnight, President Lungu was ushered outside the banquet hall so he could witness the display of the star shells.
Clad in a mess kit and accompanied by First Lady, Esther, he watched the display of fireworks which illuminated the night sky.
After the magnificent display of the fireworks at the stroke of midnight, signifying the dawn of 2016, President Lungu went back into the banquet hall to mingle with the military personnel and other invited guests.
The President left at about 02:00 hours to get ready for other assignments a few hours later at Kasisi Orphange and at Matero After Care Centre.