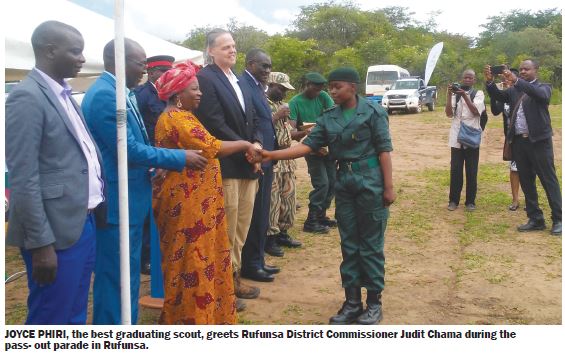 ANGELA MUCHINSHI, Lusaka
DEFORESTATION, poaching and encroachment are among illegal activities that have taken centre stage in the Lower Zambezi National Park and game management area in Rufunsa district, Lusaka Province.
This has necessitated the training of 22 community scouts under the public private partnership between the United States Agency for International Development (USAID) and Bio Carbon Partners ( BCP) to restore order in the area.
The Lower Zambezi National Park is divided into two parts comprising the valley and escarpment.
The area, whose forest has been depleted due to rampant charcoal burning activities by the local people, has immense potential to significantly contribute to the country’s tourism sector if well harnessed.
Animal species are also on the verge of extinction because of poaching.
Some people have taken advantage of the illegality that is taking place in the area to acquire land using dubious means.
This has incensed Chief Bunda-Bunda of the Soli people because of the negative impact such illegal activities have on his subjects.
Chief Bunda-Bunda says the area has the potential to improve the livelihoods of the local people.
He says a lot of people have acquired land under the pretext of using it for their animals but instead they have been renting it out and pocketing the money.
“If we can lease off land as a chiefdom and use the income generated to help out the poor, children, aged and orphans, we can grow as a chiefdom” Chief Bunda-Bunda said.
Apart from deforestation and poaching, his chiefdom is also characterized by child marriages as he says money which can be used to help especially girl children who are victims of such is being mishandled.
Chief Bunda-Bunda says the recruiting of the community scouts will help address such challenges as perpetrators will now be brought to book.
He says he will engage Government in talks to see how best they can use the land for economic benefit.
The scouts will work hand-in-hand with the Department of National Parks and Wildlife in ensuring that order is restored.
The scouts whose training began in mid august this year are coming from within the community and they have been prepared to manage their own community.
Minister of Tourism Charles Banda said during their passout parade that the ministry promotes the involvement of the local communities and chiefs in the development of game management areas through Community Resource Boards and Village Action Groups.
Mr Banda said Zambia is losing hectares of trees and valuable wildlife habitats annually due to a variety of reasons including charcoal burning, uncontrolled clearance of forests and poaching.
He said the clearance of forests especially has led to droughts and migration of families from one place to another due to poor soil fertility, reduced crop yields and water scarcity.
He said threats to protected areas and other important habitats in game management areas are placing increasing pressure on many key African wildlife species such as elephants and lions that attract tourist to Zambia.
“The loss of the very area we are today will remove the few remaining corridors that link the wildlife population between the Lower Zambezi and the Luangwa Valley ecosystems,” Mr Banda said.
And Mr Banda said Government has the policy and legal instruments in place covering wildlife, forestry, decentralisation that empowers the local stakeholders in urban and regional planning to ensure that there is planned development that benefits both people and wildlife.
US Ambassador to Zambia Daniel Foote is among the people advocating anti-poaching of wild animals and deforestation of land in Zambia.
Mr Foote, who represented USAID and BCP, said the US government in partnership with the Zambian government’s department of National Parks and Wildlife, officially launched the refurbished Mukamba Gate at the northern entrance to the lower Zambezi National Park.
Mukamba Gate gets its name from Mukamba River, where there are escarpments, valleys and a number of streams that feed into one another while wildlife feed from the same river.
The Gate was supposed to be the headquarters for the lower Zambezi National Park due to its central location as every national park has its headquarters, but its headquarters was in Chirunduand was recently transferred to Chongwe.
The refurbished Mukamba Gate benefitted from support of the USAID’s community forest programs, and its launch also included the graduation of the scouts who together with the local Community Resources Boards (CRB) will serve as frontline advocates for forest and wildlife conservation.
Mr Foote said losing Zambia’s forests and wildlife is losing a critical driver for economic growth for the local communities and activities such as wildlife tourism are only possible through conservation.
He said in protecting Zambia’s wildlife, the USAID community Forests Program invested in the refurbishment of the Mukamba Gate which now includes an improved security checkpoint, office building and wildlife police officer housing.
“This important entry point into the Lower Zambezi National Park is now better equipped to support both park management and forest protection,” Mr Foote said.
And Mr Foote said Zambia’s forests play an important role in mitigating climate change by locking up carbon dioxide drawn from the ambient air.
He said the locked carbon can be sold as “Carbon credit or carbon offset” to companies or governments from other countries to help offset the carbon dioxide they emit through manufacturing, transportation and electricity generation.
“Carbon offset therefore provides a means for communities to play a role in the global economy by mitigating the effects of climate change while reducing their own poverty and improving their livelihoods, ”he said.
It is not easy to combat poaching and deforestation completely, but it’s possible to bring down its levels, it is therefore important to engage communities and ensure they are part of this noble cause.

We are passionate about serving our country
Raphael Phiri: Living his dreams