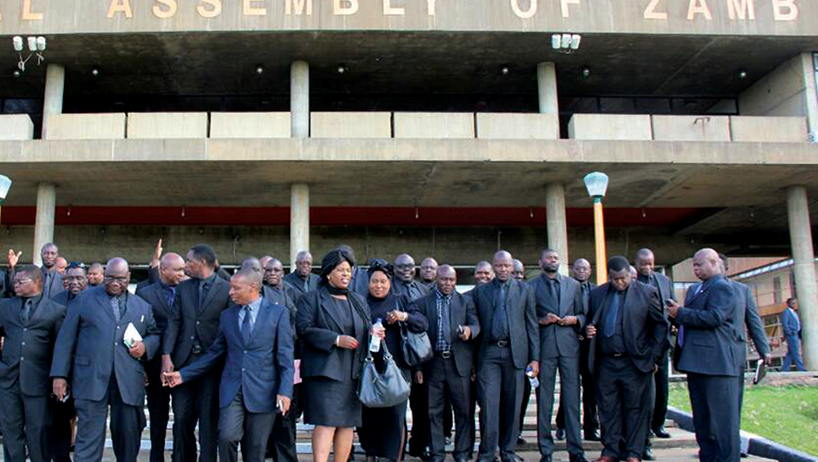 CAROLINE KALOMBE, Lusaka
THE High Court has dismissed an application by some United Party for National Development (UPND) members of Parliament to apply for leave to apply for judicial review

of the decision of the Speaker of the National Assembly, Patrick Matibini, to suspend them for 30 days without salaries and allowances.
The 48 UPND MPs were seeking an order of the court quashing Dr Matibini’s decision for procedural impropriety, unreasonableness and irrationality.
High Court judge Petronella Ngulube said in her ruling delivered in Lusaka yesterday that there was no case fit for further investigation.
Ms Justice Ngulube dismissed all the grounds stemming from illegality, procedural impropriety, unreasonableness and irrationality.
“I wish to state that I am not satisfied that the applicants have any arguable case fit for further investigation. I am not persuaded to exercise my discretion in favour of the applicants,” she said.
She noted that she had perused the correspondence between the UPND MPs and Dr Matibini and found that there was no issue for further investigation.
On the issue concerning unreasonableness by Dr Matibini to cut their pay for the duration of the suspension, Ms Justice Ngulube noted that a decision is only irrational if it is outrageous.
Ms Justice Ngulube said from the documents that were before her court, she did not find any arguable case fit for further investigation.
On June 13, 2017, Dr Matibini suspended the MPs for 30 days for boycotting President Lungu’s address to Parliament.
“The President is the head of State and Government, and you took oaths of allegiance. By so doing, you are expected to be respectful to him and always be mindful that this is a House of honour, decorum and dignity,” Dr Matibini said.
He challenged the UPND MPs to resign on moral grounds if they are not ready to acknowledge that Zambia already has a duly elected President.