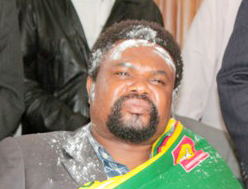 SYLVESTER CHISHIMBA, Lusaka
UNITED Party for National Development (UPND) vice-president Canisius Banda is on the verge of eviction after failing to settle his house rentals.
His landlady, Chali Tumelo, alleges that Dr Banda has been a difficult tenant in paying the rentals.
â€œHe has been staying in my house for nine years and paying rent has been very difficult. Sometimes Dr Banda would pay rentals after a month or at times, it takes two months for him to pay. After so many defaults, we decided to give him seven days ultimatum in which to pay, but still he has continued defaulting,â€ she said.
Ms Tumelo said Dr Banda pays K5,500 per month, although the market rate in PHI is between K7,000 and K8,000.
â€œThe money he is paying is very little. We have not increased rentals because he has been there for a long time. I had planned to evict him but he pleaded with us, and we gave him a chance because at the time, he had lost his wife,â€ she said.
Ms Tumelo said she entered into a new contract with Dr Banda, but he has continued defaulting, and that when she asked for the payment of rentals, he allegedly went to the extent of insulting her.
â€œI have all the text messages as proof of the insults he sent to my mobile phone. Dr Banda started treating me as though I was his tenant and he was the landlord. My lawyer and I have asked him to vacate the house on March 31st,â€ she said.
Ms Tumelo said she has asked Dr Banda to renovate her house before moving out.
But Dr Banda said the allegation is not true and that he has hardly known Ms Tumelo.
Dr Banda said some people are trying to taint his name because he is a politician.