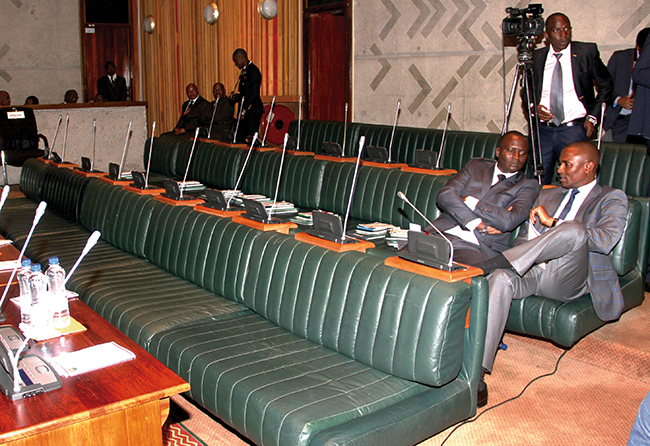 CHAMBO NGâ€™UNI & LUCY LUMBE, Kabwe, Lusaka
UNITED Party for National Development (UPND) members of Parliament (MPs) are still reeling under a barrage of condemnation for their boycott of President Lunguâ€™s state of the nation address to Parliament on Friday.
Minister of Home Affairs Stephen Kampyongo said yesterday that no one would stand in President Lunguâ€™s way as he performs his duties and delivers development to the people of Zambia.
Mr Kampyongo said the UPND parliamentarians are proving to be irrelevant as evidenced by their boycott.
Mr Kampyongo, who is also Patriotic Front (PF) Shiwangâ€™andu MP and PF national youth chairperson, said this in Kabwe on Saturday when he paid a courtesy call on Central Province Minister Sydney Mushanga.
â€œNo one will stand in his [President Lunguâ€™s] way of delivering development to the people. He is focused on delivering to the people who elected him,â€ he said.
Mr Kampyongo said people in areas such as Dundumwezi and Itezhi-tezhi should not complain of lack of development but blame their MPs who did not want to work with the PF government.
He said the UPND leadership and members should come to terms with the reality that Mr Lungu was the duly elected and recognised President of Zambia.
And Zambia Republican Party (ZRP) president Wright Musoma has described the boycott by the UPND as disrespectful and unlawful.
â€œThe behaviour of the UPND members of Parliament is shameful and disrespectful. It is a clear indication that those opposition leaders have no respect or regard for the head of State, including his office and the many Zambians who voted him into office,â€ he said.
He said the office of the President should be held in high regard by all because it holds the rightful powers duly given by the Zambian people who voted for President Lungu.
And MMD spokesperson Raphael Nakacinda says the boycott was hypocritical and reflected double standard.
â€œIf the UPND as a party has issues to raise, it is only right that it is done through the members of Parliament who represent them unlike boycotting Parliament. Their conduct is unacceptable,â€ Mr Nakacinda said.
Meanwhile, the North-Western Development Council of Elders has strongly condemned the behaviour of the UPND MPs, BUTTYSON KANDIMBA reports from Solwezi.
Chairperson Lucas Chikoti said in an interview yesterday that the behaviour of the MPs was likely to deny people in the constituencies where they come from development.
â€œThe best would have been if they consulted us to let us who voted for them to tell them whether they should protest, boycott or not, but they went ahead without having the consent of the people who voted for them. We are in actual fact in need of development in the province,â€ Mr Chikoti said.