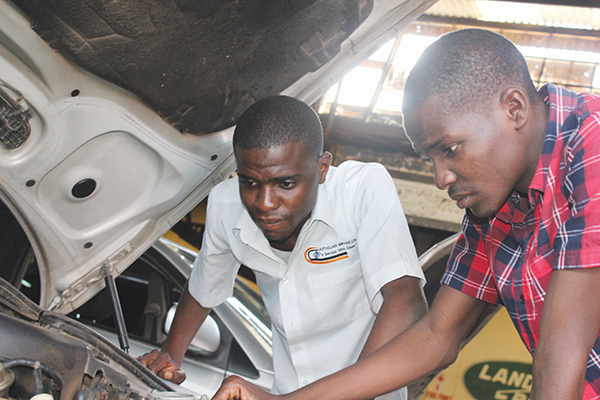 JACK ZIMBA, Kitwe
LIFE did not have a rosy start for twin brothers Leonard and Lenox Kachinda. When the boys were only two-years-old, their mother died.

Their introduction to adulthood was also filled with loss and pain, as their father died in 2013. The twin brothers were then aged 20 and still at college.
The boys have no recollection of their mother’s death, but it was their father’s death that had a huge impact on them.
Pushed to the deep end, they quickly had to learn how to swim and keep their father’s company, a garage called Autoclass Services Limited, afloat. Although they were both inexperienced, they were armed with a lot of determination and passion.
But Lenox still has to admit taking over the business was not easy, as the twins had to stand up to the elders in the family, who wanted to take it over.
He says some family members had wanted someone else to take over the business because the 20-year-old brothers were deemed too inexperienced to run it.
“Some employees even resigned because they thought the company was not going to survive,” he says.
And there was also their step-mother, who stood in the way. She was a major shareholder in the business, but, according to Lenox, not involved in the daily running of the business. In the end, she simply resigned and entrusted the shares to the twins.
“It was not easy because at that time we were not fully involved in the operation of the company. We were just ordinary workers who would work and get paid at the month-end,” says Lenox, who is the older of the twins, and managing director of the company. His twin brother is operations manager.
The brothers have had to overcome their childhood rivalries to work together in running the business.
Lenox says he and his brother used to fight a lot when they were little boys.
“When you are in partnership, one of you must pull back and accept that the other person is higher than you. One must lead,” says Lenox.
Born in 1992, the boys had joined their father in the garage after completing their secondary school education and worked in the workshop. Lenox worked as the foreman.
Their father established the business in 2007 in Ndola, and later moved it to Kitwe. He was skilled in both auto mechanics and auto electrical, and he passed on his skills to his sons.
Lenox developed interest in auto electrical. But his childhood dream was to study information technology.
As for the younger twin, Leonard, he got interested in auto mechanics much earlier.
But despite what the boys had learnt at the garage, their father still wanted them to go to college.
And so in 2011, they both enrolled for training at Kitwe Trades School (KTS), a technical school that is sponsored by Konkola Copper Mines (KCM). Apart from the technical skills, the twin brothers also gained entrepreneurial skills, which they say have really helped them in running the business.
The twins are now considered among the best products of the skills college, which provides what the principal, Victor Nkole, calls “seamless training”, meaning graduates are industry-ready.
“We don’t produce students who when they leave school, they can’t do anything,” he says.
The school runs on an annual grant of US$750,000 from KCM, and is one of the major contributors to the skilled workforce in the mining industry.
KCM took over the college, which previously belonged to the Zambia Consolidated Copper Mines, in 2012, refurbishing it and re-equipping it with modern technology.
The twins themselves have a lot of praise for the school.
“We learnt a lot at KTS,” says Leonard.
And as for the garage, Lenox says it has improved from where their father had left it.
The main clients for the garage are mines and other big corporate entities. And nothing is too big or too small for the brothers – they handle both heavy duty trucks from the mines and small vehicles.
Lenox says his company manages to get many contracts because it is always the lowest bidder.
“We are a smaller company so, we always try to play around with the figures,” he says.
He says with a small workforce, the company has minimal overhead costs. The garage employs eight workers, including the twins’ former college-mate at KTS, who is now manager of the company.
The company makes a monthly net profit of between K150,000 and K180,000. Lenox says last year was the best in terms of business since they took over the company.
“We have tried our best to sustain this company. Many people thought we would fail, but when you are determined in life, you will make it,” says Leonard.
And Lenox has big dreams for the garage.
“My dream is that by 2030, we will be the best company in automotive engineering in the Copperbelt,” he says.
But with so much money coming into their hands, the twins have to maintain discipline.
“I mind my spending and I don’t like getting fancy things,” says Lenox, who got married last year, and takes care of four of his siblings.
One of Lenox’s great fears is to run-down the company and go looking for a job.
“People would laugh at me, and I don’t want to be laughed at,” he says.