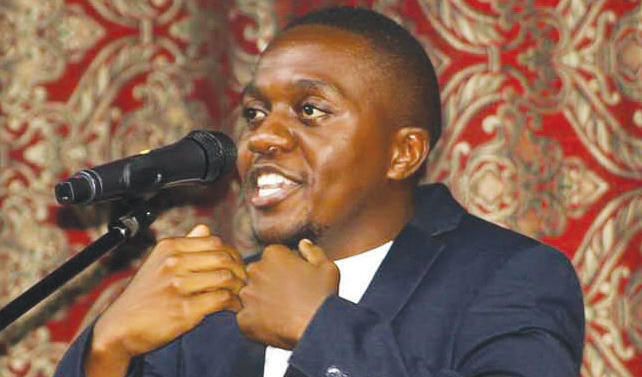 ZIO MWALE, Lusaka
BITTERSWEET poet and writer Luka Mwango, 27, passed away on Monday morning after collapsing and was buried in Lusaka on Thursday.
Freddie Tembo, a close friend of Luka, told the Weekend Mail in Lusaka that Luka collapsed in the morning and was rushed to Chainda Clinic but was transferred to Chelston Clinic where he was certified dead.
“He was okay the previous day,” Freddie said.
Tributes have been pouring in for Luka with National Arts Council of Zambia (NAC) director Adrian Chipindi saying the entire arts fraternity is sad with the death of Luka.
“At 27, Luka has left a legacy which will live on, his passion for poetry and writing will be greatly admired by many,” the NAC director said. “This year has not being easy for us; death has robbed us with so many young talents.”
And Kapembwa Wanjelani, the founder of BitterSweet, told the Weekend Mail that Luka will be greatly missed by his fellow poets and the arts industry at large.
“It is really a blow to us as Bittersweet; the younger man was so passionate about spoken word. All we can do right now is to thank God for beautiful memories we shared with Luka,” Kapembwa, who is also the co-founder of the Tilowa Comedy show, said.
Luka, the author of the novels Twisted and Perdition, is also known for his poem Dear Future Wife that peaked at number one on indie South African music site Bozza.com and was featured on the first ever African poetry Mixtape.
He performed on various stages in Zambia like Standard Chartered Bank’s 110th Birthday, Trace Africa Summer Bash, Zambia Music Awards and Mosi Day of Thunder among others.
As an author, he has been invited as a guest panelist at the Tilembe Literary Arts Festival in Zambia and Time of the Writer Literary Arts Festival in South Africa. He was also nominated for Best Spoken Word at Zee Music Creative Awards.
Luka was also a performance coach who regularly coached slam poets around the country and more recently was teaching theatre and performance in primary and secondary schools.
He described himself as a dynamic mix of idealism and realism.