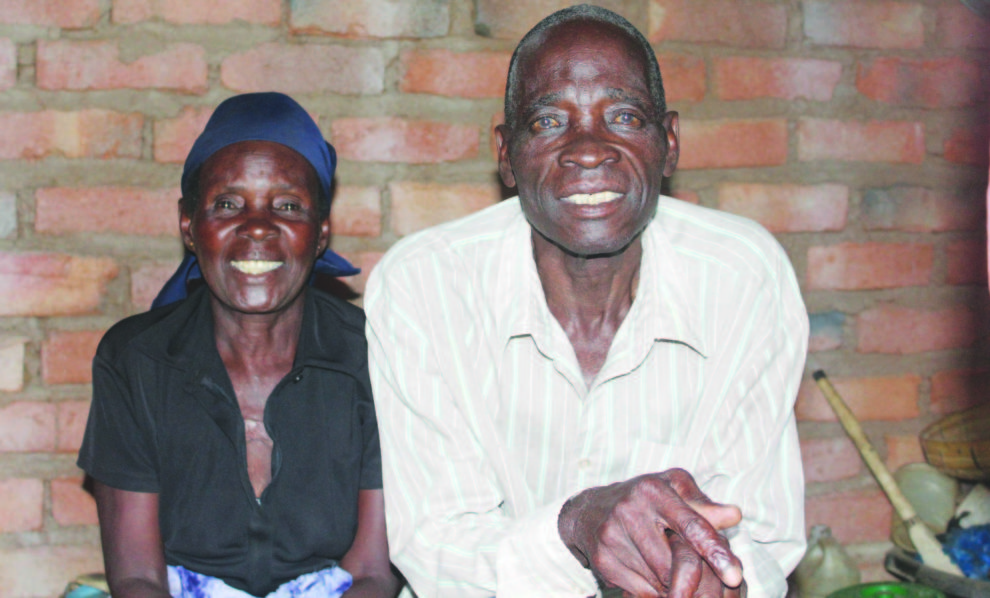 HOW WE MET with YANDE SYAMPEYO, Petauke
IT WAS teenage love and attraction, which emanated from the love for traditional dances, which drew Mekelani and Asinet Zulu together.
That was in 1962 at Zuze village in Petauke district, where villagers were showcasing various traditional dances.

Asinet, who was 14 years old then, was participating in the regular traditional dances for girls known as Chimutali when Mekelani spotted her.

Mekelani, who was 20, also took part in the traditional dance, known as Gule when he fell ‘head over heels’ for spinster Asinet.
He recalls how he was so attracted to Asinet that he did not waste time to inform his parents about his intentions to make her his wife.
“I approached my parents over the matter and to my relief, they did not object to my intentions to engage Asinet because they were also of the view she was decent and from a decent family,” he recalls.
And Asinet did not hesitate to say yes to Mekelani’s proposal when she was informed about his intentions to marry her.
“Timavina Chimutali (I used to dance to Chimutali) and I would regularly notice Mekelani, who could not keep his eyes off me.
“Eventually, I slowly began to fall in love with him and so when I was informed he wanted to marry me, I was excited,” she narrates.
The couple, which is now 55 years in marriage, narrates how bitter- sweet the golden jubilee in their union has been.
Mekelani, 75 years now, married Asinet 69 now, on 15, June, 1963, and together they had eight children of which four sadly passed on.
Asinet recollects how she did not mind getting married at a tender age as she did not want to be on the record of unwanted pregnancies.
She adds that the failure by her parents to enrol her in school propagated the desire to get married.
Asinet blames the stereotyping of the age as most parents, especially in rural areas, found it as a waste of time to send a girl to school.
“I have never been to school; I don’t even know how a desk looks like. Schools were readily available; unfortunately, our parents thought it was a waste of time to enrol us in school because to them, we belonged in the ‘kitchen’.
“However, I’m glad that most parents, nowadays, have realised the importance of educating girls,” she says.
“Whenever I finished dancing to Chimutali with my friends, I spent time with my grandmother.
“So when Mekelani’s parents approached my grandmother over the proposal, she in turn informed my parents, who did not object to the engagement as they were informed how deeply we were fond of each other,” she recalls.
Asinet and Mekelani, who are now reputable marriage counsellors, have no regret marrying at a tender age.
“A number of families approach us for counsel and we have been of help to a number of them.
“We have kept each other and seen our parents pass on and here we are, still keeping on,” she brags.
Mekelani, who equally does not possess any education, is proud of the decision he made 55 years ago to spend the rest of his life with Asinet.
He narrates how he undertook ‘99 jobs’ to sustain his wife and eight children.
“I used to do farming as well as some other part-time jobs to ensure my family was provided with basic needs,” he says.
However, their union has not been easy-going as ‘evil forces’ at one point were at the verge of separating them.
In 1979, Mekelani sadly went astray, left his wife, who had just given birth to a set of twins, to co-habit with a ‘sugar mummy’.
Asinet recollects how devastated she was when her husband abandoned her for over 10 years for an older woman, who already had children.
“He left me when the twins were still babies. I had an obligation as mother of the children to raise them without their father. I remained resolute not to go astray but was determined to better my life and that of my eight children,” Asinet narrates.
She says although she felt betrayed by Mekelani, she was at peace and was ready to forgive and welcome him back into her arms.
She remained optimistic he would someday return to her.
“My mother taught me to be tolerant in marriage and always seek to forgive my partner, and so when he decided to return home, I welcomed him,” she says.
Mekelani recalls how he was haunted during the years he abandoned his wife and children.
He says he was taken away by ‘earthly things’ adding that he regretted every moment he was away from his matrimonial home.
“It was tormenting to leave my family. Even when I was away, my heart belonged to my wife. She is the love of my life.
“I was just taken away by earthly things. The devil took over my soul hence I was confused,” he narrates.
Mekelani counts himself lucky to have been accepted by his wife after so many years.
Asinet, however, advises couples to avoid adultery and other vices that can destroy their marriages.
She says couples should strive to stick together in both good and bad times to prevent their children from going astray.
“Marriage is not about riches, it is about love, forgiveness and tolerance. If a couple does not adhere to the above principles, the marriage is bound to fail.
“He left me for over 10 years, yet I still welcomed him back into our home; that is known as love,” she says.
She further advises couples to persevere and pray together to overcome stormy situations.
Asinet, a staunch Catholic, is a renowned marriage counsellor who derives the expertise from her experiences.
“My home is now like a police station as people are ever coming in and going out to seek guidance. My husband and I are glad to assist people to overcome their challenges, in every way possible,” she says.
Mekelani says the past experience has taught him to love and appreciate his family more.
“When you start a family, build the home together. When there are differences in the house, resolve them amicably. We usually ask for forgiveness whenever one of us is in the wrong,” Mekelani says.

Brighter side of anti-cholera fight
Cholera: A tale from the township