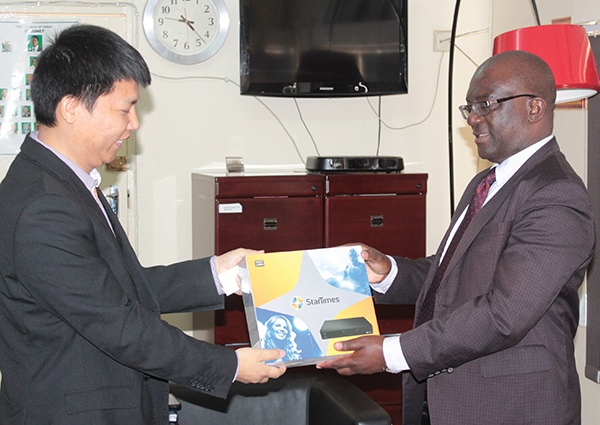 CHANDA MWENYA, Lusaka
TOP Star has targeted to attract millions of customers when it fully starts its operation.

Top Star chief executive officer Leo Liao said this in Lusaka yesterday when he called on Zambia Daily Mail managing director Nebat Mbewe.
Mr Liao said Top Star has over 400 channels to choose from to and will provide attractive content for a competitive price.
Top Star content includes Hollywood movies, Bongo movies in Swahili and Novena movies which are rooted in the Latin sub-culture.
“Top Star is in partnership with FIFA, we will show the Confederation Cup [in June this year in Russia] and the Under-20 World Cup games. As you know Zambia are the under- 20 African champions and the games [in South Korea] will start soon.
“We also have the Bundesliga- Germany League, League 1 –Italy, the French League and the Chinese Super Legue. And currently, there are many Zambians playing football in the Chinese Super League”, he said.
Mr Liao said in future, Top Star project centre will support local productions in Nyanga and Bemba, to enhance cultural exchange through film.
And Mr Mbewe said Zambia Daily Mail will use avenues where Top Star is penetrating as platforms for future collaborations.