By JOE KALUBA
A REALÂ  humanÂ  rightsÂ  activistÂ  willÂ  beÂ  veryÂ  happyÂ  toÂ  hear thatÂ  theÂ  sentencingÂ  to deathÂ  of moreÂ  than 300 inmatesÂ  hasÂ  nowÂ  been turnedÂ  into lifeÂ  imprisonment. Concurrently, a strong Christian will rejoice for every life that is spared. This is good news.
People should know that Zambia is one of the countries which has not yet abolished the death penalty. Despite this, no one on death row has been executed since 1997.
I think it is a step in the right direction. And the move by President Lungu to commute human beings on the execution list to being alive is a clear indication that Government means well for every Zambian.
International organisations have also praised President Lungu for commuting the death sentences.
Amnesty International director for Southern Africa Deporose Muchena notes that the step taken by President Lungu is a progressive one.
â€œPresident Edgar Lungu has taken a very progressive step by deciding to spare those 332 people the death penalty, the ultimate cruel, inhuman and degrading punishment. We commend him for this decision, but he must do more and abolish the death penalty in the country.â€
Donâ€™t worry Mr Muchena. Despite people wanting to discredit Zambiaâ€™sÂ  image, weÂ  areÂ  goingÂ  to showÂ  the worldÂ  thatÂ  weÂ  areÂ  up to theÂ  task.
Prison is a place of rehabilitation, correction and reflection
Some weeks ago when â€˜Generalâ€™ Kanene released a song which was praising the works of the government and President Lungu, there was a debate on a Facebook page of one of the prominent artist and presenter of a renowned radio station. Mwansa (not real name) noted that it was not fair that Kanene was allowed to sing whilst in prison. Mwansaâ€™s argument and that of others was that Kanene was enjoying himself.
According to them, prison should be a place where people should be made to suffer for the things they did. Giving them freedom to enjoy the way Kanene was doing, was seen as not being fair.
Contributing to the discussion, I noted that jail is a place for correction, rehabilitation and reflection.
Inmates should learn that what they did was wrong. Some people also argued that when someone is in prison, they should continue developing their skills and talents.
Those who lack in this should be given chance to learn skills or discover talents.
In agreeing with this, I alluded to the fact that in some countries, inmates are given chance to start or continue with studies. Of course, there is the issue of saving time. Some inmates are pardoned and others get reduced sentences.
We must remember that when they do their time or get pardoned, they should fit in the society. We should not judge others just because we sin differently.
From numerous arguments about Kanene, I have come to understand that for some, itâ€™s more of a personal matter than a human rights matter.
We must also remember that this case was almost dropped at some point. It was the same organisations and the so-called child activists who kept quiet when an uncle allegedly defiled a young girl in the University Teaching Hospital, who were in the forefront in calling for Kaneneâ€™s head. I call these type of people plastic activists.
President for all Zambia: People will see their loved ones
When Mr Lungu was campaigning for presidency, he said he was going to be a President for all Zambians.
In changing the death sentence to life imprisonment, President Lungu has shown that no matter where a person is, he respects them as Zambians.
As a Christian and a person against killing of people regardless of any reason, I give respect to Mr Lungu.
That wife, husband, brother, sister, child, mother, father will have chance to see their loved ones. Where these people are doesnâ€™t matter. Life has been given to them.
I canâ€™t imagine how that parent will feel to be told that your son will not be executed. Tears of joy.
I know the headlines will be about Kaneneâ€™s pardoning. But for me, itâ€™s the turning of the death sentence into a life sentence. I will always say killing someone or wanting someone to die is not the best lesson to the people. Killing is satanic, killing is inhuman. Wishing others to die or rot in prison is inhuman.
Mr Lungu has once more made me proud to be a Zambian. While others go to look for publicity abroad, Mr Lungu makes positive international headlines without leaving the country.
Zambia will be known to the outside world for the good reasons. Bravo Lungu!!
Be patriotic, be proud of your country.

The author is a PhD candidate in political, gender and transnational studies at
Goethe University – Frankfurt,
Germany 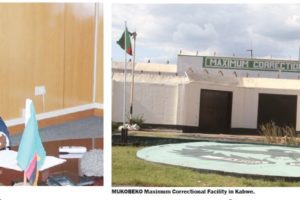