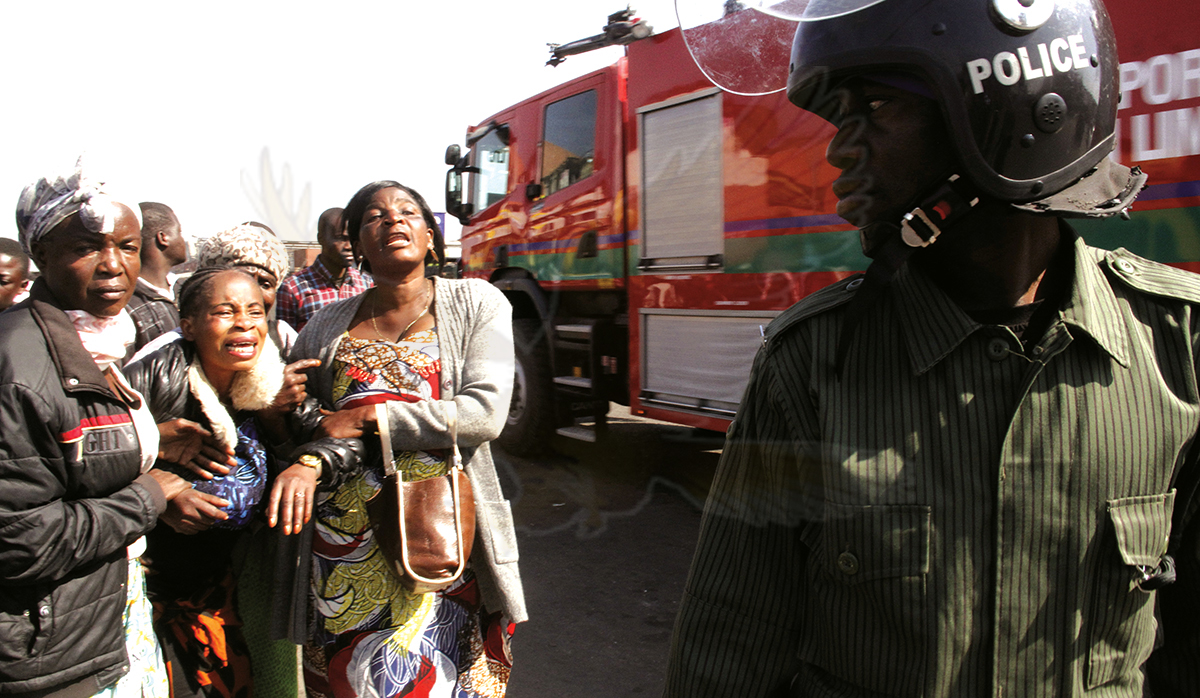 A WOMAN is consoled at the scene. PICTURES: COLLINS PHIRI

JACK ZIMBA, Lusaka
A WOODEN market stand still smoulders a day after fire gutted Lusaka’s City Market. After the leaping flames have been doused by firefighters, the

scale of destruction is revealed.
On any given day, before Tuesday’s fire, City Market was a busy trading area thronged with thousands of traders and shoppers and a cacophony of smells and sounds. But today, the air is filled with the choking smell of burning.
Zambia’s biggest market is now a possible crime scene, cordoned off to the public while forensic experts comb the area for any evidence of what could have caused the fire on Tuesday morning.
The fire started in the southern part of the market and quickly ate its way through the stalls. It took five fire engines to put out the fire, five hours after it broke out.
According to a source from the Fire Brigade, the department received a 993 call at 05:20 hours.
The source said the fire was first noticed by a cleaner, identified as Hildah Phiri, in a stationery shop belonging to a Mr Zulu.
When the firefighters arrived at the scene, the fire had spread to other shops. The source said firefighters later had to break the flammable plastic roofing to stop the fire from spreading.
In the end, 1,901 stalls were burnt, according to police.
BROKEN DREAMS
Outside the market, a sea of anguish-filled faces, mostly of women who traded in the market, desperately wait for answers. For most of them, the loss is too much to comprehend, and the future too bleak to imagine.
Among the traders, there is a palpable sense of sadness. Each of the women has a sad story to tell.
Miriam Mazyopa says she was able to see plumes of black smoke billowing into the morning sky from her home in Mandevu township, about 10 kilometres from the gutted market.
“When my sister phoned me and told me that City Market was on fire, I did not believe her. So I jumped on a taxi and rushed towards town. I could see the smoke from my home, but I did not think it was coming from City Market until we reached near,” she says.
“When we arrived here we couldn’t go in because the fire was very big. When I managed to get inside, I found my shop open and empty,” says Mrs Mazyopa. She traded in second-hand clothes.
Although her shop was saved from the devastating fire, it was ransacked by young men who had rushed to the scene.
Mrs Mazyopa says she developed a runny stomach immediately after seeing the devastation.
Built in 1997 by the military, City Market was former president Frederick Chiluba’s answer to end street vending, and Mrs Mazyopa has been trading from the facility from the first day it was opened.
When it was built, City Market was the country’s first modern market.
“I started trading here in 1997 after Chiluba built this market. Before then I used to trade from the streets. All the 20 years I have been here, I have never seen anything like this,” she says.
“I’m shocked because it was only about a month ago when we were called for a meeting here by our chairman and council officials and they told us that they wanted to start closing the market at 18:00 hours. They said all of us must start packing our merchandise at 17:00 hours,” she says.
Since it was built, the market has never recorded any fire.
The women tell me that the market had strict regulations meant to prevent any possible fire outbreak.
Mrs Mazyopa says market authorities always switched off power supply to socket outlets at 18:00 hours, and only switched it on the following morning.
She says braziers and other open fires were also strictly forbidden inside the market, neither was smocking allowed. Alcohol was also banned.
If the market followed such strict measures, how then did a fire ignite?
Although investigations into the City Market fire are still ongoing, a string of similar events – albeit at a lesser scale – in various parts of the country has made many like Mrs Mazyopa to think there is a sinister motive behind the fires.
Charity Mulenga, a resident of Kanyama, says she heard about the fire when someone phoned her sister around 05:00 hours.
She rushed to the market, but only managed to save three fridges she used for her business.
For Agnes Banda, a widow with two children, her only hope now lies in God.
“I’m just looking up to God that he may help us go through this situation. My future lies in the hands of the Lord. That is all,” says Agnes.
Her stall, Stand 264, survived the fire, but she lost almost everything through looting as men descended on her shop.
“The men who rushed here were pretending to be helping to rescue the goods but they were stealing from us,” says Agnes.
“I was depressed with what I saw and I cried because this is my only means of survival. I live in a rented house with my two children. My husband died a long time ago. I don’t have any source of income apart from City Market,” she says.
Her plea is to have the market reopened soon.
“They should not close this market for rehabilitation because we will have nowhere to trade from. They will kill us. This is where our livelihood lies,” says Agnes.
She says she needs capital to restart her business, selling second-hand shoes.
Malven Kayuma, who trades at the New Soweto Market, which is adjacent to City Market, is sympathetic with his fellow traders. He, himself, has been a victim of fire at the market.
Last year in July, his shop was gutted, destroying goods.
“What has happened at City Market is very bad because most of the traders are widows and they support their businesses through borrowing,” he says.
He says many of the people who lost goods in the fire at Old Soweto have never recovered their businesses.

Tags: in flames, our livelihoods, The day, went up

Of the people of Zambia and peace