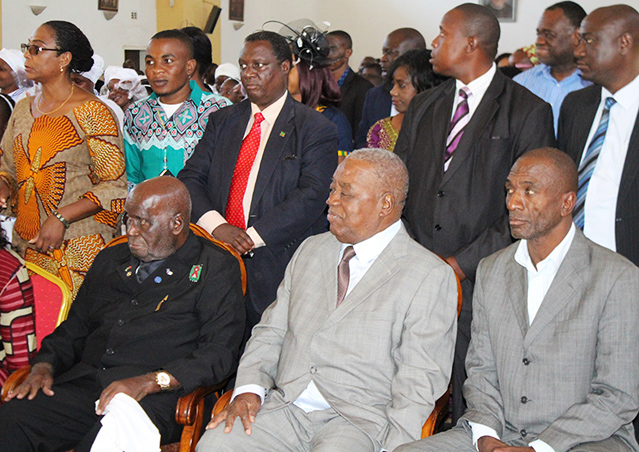 PRISCILLA MWILA, Lusaka
OCTOBER 28 was not an ordinary Sunday for congregants of Saint Mathias Mulumba Catholic Church in Bauleni, Lusaka, as it was the day when the church held its independence celebrations.
The independence celebrations were held alongside a mass to honour former presidents Kenneth Kaunda and Rupiah Banda who were treated to a thunderous welcome as they arrived at the church.
The two former presidents were treated to a joyous welcome as the vehicles they were in drove to the entrance of the church.
The jubilant congregants burst into screams of joy as Dr Kaunda and Mr Banda were being ushered into the church for the colourful mass.
The mass was characterised by songs of praise and thanksgiving as well as prayers for the two former presidents and the nation.
The mass could not be complete without the presence of a group of flower girls popularly known as ‘ba Stella’. The girls, clad in white dresses with a pinch of black and white hair bands, as well as matching shoes, danced to a variety of songs as St Mathias Mulumba main choir sang different songs with the support of the beat of drums.
The mass started with Dr Kaunda hoisting the Zambian national flag at the altar of the church as the jubilant congregants clapped and ululated. The hoisting of the flag is a traditional practice around the country on the eve of Zambia’s Independence Day.
This historic event first happened at midnight of October 23, 1964 at Independence Stadium in Lusaka.
After the lifting of the flag, Saint Mathias Mulumba Catholic Church Bauleni Parish priest Diravya Rupen decorated Dr Kaunda and Mr Banda with ‘clothes of honour’ and thanked them for their contributions to the nation.
Mr Banda, who was the first person to speak to the congregation, started by sharing his experience when he was still in UNIP and how Dr Kaunda reacted when he received news that he had lost elections in 1991.
“After most of the votes were counted during the 1991 elections, I, one of Dr Kaunda’s sons and another colleague decided to go to him, to break the news of our loss. We wanted to advise him to accept the results because the people of Zambia had spoken through the ballot.
“When we got to State House, we found him seated. To our surprise, he told us that he had accepted the results and was already preparing an acceptance speech. I did the same when my turn came, I peacefully accepted the results and moved on with my life,” he said.
Mr Banda said he followed Dr Kaunda’s example of good leadership of respecting the decision made by Zambians.
He said leaders should be pillars and ambassadors of peace in the country.
Mr Banda said there is need to ensure that Zambia remains a country admired by Africa for its peace and unity
He urged political leaders to be ready to accept change as and when it comes.
Mr Banda said the power to choose leadership lies in the hands of Zambians, hence the need to respect their decision.
“Dr Kaunda maturely and accepted defeat when he lost elections in 1991. I also did the same when my turn came. Peace and unity continued after that and we have been here to offer counsel. Let’s treasure our freedom and live in unity,” he said.
When Dr Kaunda’s turn to speak came, his speech could not have been complete without leading the congregation into singing his ‘Tiyende Pamodzi ndi mutima umo’ song.
Dr Kaunda emphasised the need to uphold peace and unity that the country has enjoyed since 1964.
He encouraged the church to continue giving wise counsel to the nation.
“Zambia needs peace because there is nothing good that can come out of this country without it. I pray that may the good Lord continue to bless us and this country. I am happy to celebrate independence with you in style. Thank you for honouring us,” he said.
Dr Kaunda was also happy that St Mathias Mulumba Catholic Church had trained the flower girls to take part in various activities.
He urged the church to continue guiding the children in the right path which he said would help them become responsible citizens when they grow up.
And delivering a sermon, St Mathias Mulumba Catholic Church Bauleni Parish deacon Joseph Simbarashe encouraged Zambians to be strong and always seek the face of God.
Deacon Simbarashe said Zambians should be proud of the country being a Christian nation.
He encouraged the congregants to always look to God for their every need.