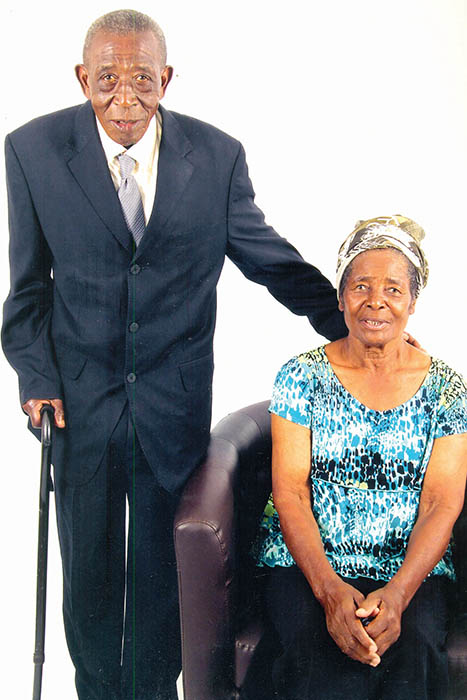 By KAPALA CHISUNKA
AT the age of 24 and 16, Timothy Mutale Chilangwa and Belita Kaluba Chilupe could never have envisioned that 67 years later they would still be married and be great, great grandparents.
In an age where divorce cases have become the norm and the sanctity of marriage has lost its meaning, it is understandable why Mr and Mrs Chilangwaâ€™s union is celebrated by their 10 children, 26 grandchildren, 21 great grandchildren and two great, great grandchildren.
Interestingly, Mr Chilangwa 90 and Mrs Chilangwa 82 are first cousins who grew up in an era when arranged marriages were common.
â€œDuring our time, parents arranged marriages. We were just informed about the arrangements in our case; I was told he is the man I was to marry. And since we were already friends and loved each other, I had no problems with their decisions,â€ Mrs Chilangwa said.
She said the two got married in Mpika district in Chief Chikwandaâ€™s area where she was born. She explained that in the olden days, girls got married early and for the majority of women, marriage was one of the most important stages of their lives.
â€œArranged marriages worked for us; it was the only way we knew people got married. So, there was no such thing as being forced because every girl was looking forward to getting married within the chiefdom,â€ she said.
Mr Chilangwa chips in and explains that his wifeâ€™s character and personality stood out and that was the reason he was attracted to her. He said he knew even before they were married that she was the woman he wanted to spend the rest of his life with.
â€œShe was the only woman I wanted to grow old with; the only woman I wanted to be the mother of my children, the only woman I knew I needed in my life. I am glad I made that choice many years ago and that is the reason we are still here today,â€ he said.
Mr Chilangwa, who fondly remembers his early days in Mpika and Lusaka, narrated that he was born in Chinsali district at Lubwa Mission but that his family later moved to present day Malawi where his father worked as a carpenter.
He said his family later relocated and settled in Mpika in Chief Chikwandaâ€™s area where he met his wife. After stopping school in standard four, he opted to start working in his older brotherâ€™s shop before finally deciding to settle down in 1947.
Mr Chilangwa said during that time, Chief Chikwanda emphasised the need for his subjects to marry within so as not to â€˜polluteâ€™ their tradition and culture.
Mr Chilangwa said the following year; he decided to relocate to Lusaka for greener pastures leaving his pregnant wife.
â€œI later sent for her and together we settled in old Kabwata Township and raised our children.Â  That time things were so different and uncomplicated. My wife helped raise the children.
I am blessed that I have a wife who also acknowledges the importance of education; a principle that we have passed on to our children, their children and their childrenâ€™s children,â€ he said.
The couple who are staunch Christians also credited the success of their marriage to having placed God as their foundation in their union.
â€œI can cite a lot of reasons to the success of our marriage such as love, respect, tolerance and communication but all these would not be possible if we had kept God out of our union. There is nothing and no problem on earth or in a relationship that God cannot solve; and lucky for us we realised that even before we got married,â€ Mr Chilangwa said.
And Mrs Chilangwa said marriage should always be about God. She regretted the current rate of divorces as compared to their generation.
â€œIt is not that we did not have problems in our marriages, it is because we trusted God and respected our vows; the vows we made before God and to ourselves. We also valued and loved the institution of our marriage.
Our prayer in our marriage has always been to God to sustain our marriage, to give us long life to love each other and our family,â€ she said.
Mrs Chilangwa said unfortunately, for the younger generation a lot of factors such as money and education seem to contribute to the failure rate of the sacred institution. She said a lot of people are getting married for the wrong reasons and do not take sacred the vows they make to each other when they get married.
â€œWhen we were growing up, we were taught to love our husbands, to be submissive to them and take care of our children and homes. We relied on our husbands. We loved our husbands and marriages more than we loved money but that is not the case nowadays,â€ she said.
She said more women have realised the importance of having an education and being self-reliant so much that they are competing with their husbands even in homes.
â€œIssues of being submissive do not seem important to the younger generation any more. It is all about money especially that more women are doing it for themselves so marriage doesnâ€™t seem as important, which is unfortunate especially when a woman is more educated than the husband ,â€ she said.