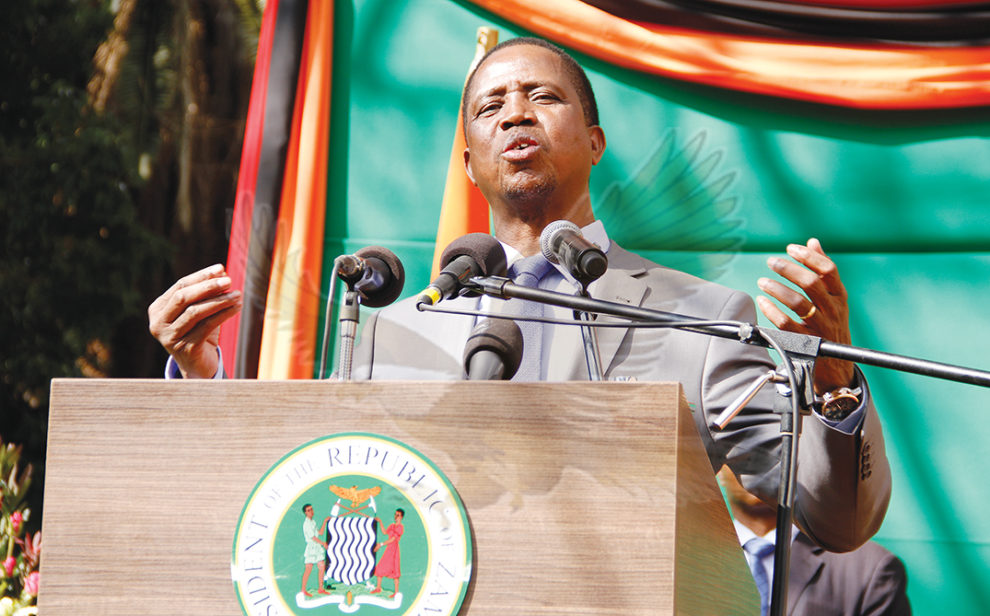 HONE SIAME, Lusaka
PRESIDENT Lungu says acts of terrorism aimed at instilling fear in him by some opposition politicians will not compel the ruling

Patriotic Front (PF) into forming a government of national unity with losers in the August 11, 2016 general elections.
And President Lungu has announced that investigations into the fire that swept through Lusaka City Market on Tuesday have revealed that there was no electrical fault, but an act of sabotage.
Speaking during a press conference at State House yesterday, President Lungu said acts of lawlessness that have continued building up across the country through the burning of markets, courts and destruction of Zesco installations are political.
He said the destructive and undemocratic strategy of sponsoring barbaric acts by some losing opposition politicians will not work because the PF was given the mandate to run the country’s affairs by the Zambian people.
“We will not be compelled to form a government of national unity. There is a deliberate strategy to drive us to the negotiating table to form a government of national unity. They want to create terror and panic.
“Zesco has told us that there was no electrical fault in that fire at City Market. These are acts of terrorism aimed at intimidating me to revisit the results of the August 11 general elections. We will not do it,” President Lungu said.
He said losing candidates should learn to concede defeat and respect the will of the people in line with tenets of democracy as opposed to resorting to undemocratic means of usurping State power.
“We are in charge because we met the 51 percent threshold. We have to follow the Constitution. We have the power but we will look after them. There will be no retribution,” President Lungu said.
He said sporadic fires and lawlessness that has embroiled the country since last year’s elections are a culmination of Armageddon threats some opposition politicians vowed to sponsor if they lost elections.
He said the fate of incarcerated United Party for National Development (UPND) president Hakainde Hichilema will be decided by the courts, and that he will not interfere in the cases.
He said he is aware that some foreign elements have embarked on a mission to indirectly recolonise some African countries by sponsoring some opposition politicians to champion their interests.
The head of State said he will ensure the republican Constitution is upheld in all spheres by using the powers vested in him to always act in national interest, and that the powers given to the police do not amount to dictatorship.
“I am here to protect the Zambian people against any excesses. There is a state of emergency in Addis Ababa but people are going about their businesses. If you break the law, we will pick you up. Those who speak for people’s liberties should continue,” he said.
He also assured the media that Government will ensure they operate freely.
On Wednesday Government invoked Article 31 of the Constitution to give police more powers to stop a spate of economic sabotage in the country.
This entails that sabotage suspects may be arrested and detained for more than the stipulated 48 hours before being taken to court.
Civil liberties have, however, not been suspended as the case is under a state of emergency. Under this declaration, if the sabotage continues, the President may declare a state of emergency.
The powers being invoked are in the Preservation of Public Security Act as opposed to the Emergency Powers Act used under the state of emergency.
Addressing the nation on Wednesday night, President Lungu said the application of Article 31 of the constitution has been made in the interest of the country to safeguard property and lives of citizens.
This comes in the wake of a string of acts of fire outbreaks and vandalism which President Lungu says are premeditated acts.