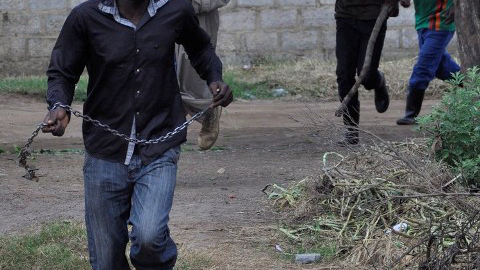 THAT most residents of Kitwe’s Kwacha Township spent their Christmas Eve and night indoors in fear of a notorious gang calling itself ‘Sons of the Devil’ is indeed very sad.

Christmas is celebrated to remember the birth of Jesus Christ.
It’s a time when family and friends come together, give and receive presents and are generally in a partying mood.
Like citizens elsewhere, Kwacha residents wanted to enjoy themselves – go out and have fun.
However, the ‘Sons of the Devil’ gang decided to restrict freedom of movement for the residents of Kwacha by warning it would beat up anyone loitering at night during the festive season.
This is how the residents ended up involuntarily confined indoors because the gang made it clear that they were going to shed blood this Christmas.
Why should our people continue to live in fear in their own country?
The conduct of the gang members who are mostly youths, some of whom have in the past been arrested, fined and released, is very unfortunate because movement and association is one of the basic freedoms our citizens enjoy.
This freedom, we believe, was not just deprived from the Kwacha residents only.
This was and continues to be a countrywide phenomenon.
The only difference is that while Kwacha residents have been bold to share their experiences, their colleagues in Lusaka’s Chibolya, Kanyama and John Laing have chosen to live with the fear of terror.
This country has several ‘Sons of the Devil’ operating in different shades and shapes.
Even some political cadres are also some form of ‘Sons of the Devil’ because they have hidden agendas.
They promote criminality such as land grabbing in the name of political parties.
These terror and criminal gangs have infiltrated our communities at various levels and raise concern about the safety of citizens.
Terror gangs like the ‘Sons of the Devil’ are a threat to peace and stability which the country has enjoyed.
The continued presence of the gangs in our communities is the reason why crime and violence continue to be the order of the day.
These groups continue to hold communities like Kwacha in Kitwe hostage.
It is a pity that our communities are now breeding grounds for terror and criminal gangs.
There danger of condoning such groups is that with time, they become conduits of radicalisation and recruitment by extremists and terrorist organisations.
These terror and criminal gangs have continued to thrive as if this country has no police.
We challenge the Zambia Police Service to rise to the occasion and weed out these criminal gangs from our communities.
Our citizens can no longer continue living in fear when the police are around.
We also urge citizens to cooperate with the police by reporting the terror and criminal gangs.
Citizens should form neighbourhood watch groups as a way of countering some of the criminal activities.
Being quiet will not help our citizens.
After all, criminals live with us in our communities. We eat, drink and sleep with them when their dwelling place should be the prison.