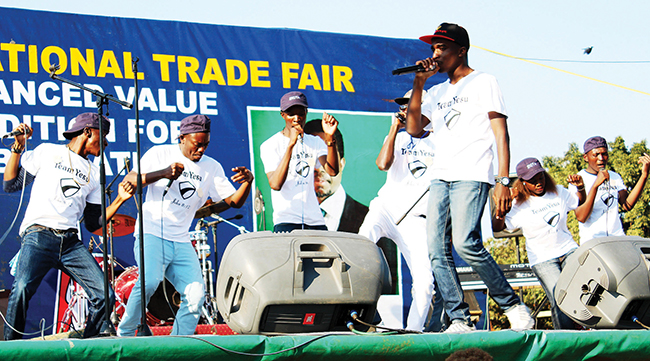 STAFRANCE ZULU, Ndola
AFTER performing at Z-Mart, then Kafubu and Jacaranda Malls in March this year, Team Yesu, an 11-member ensemble of gospel artistes aiming to make a collective impact on society through their music, is now steadily increasing its fanbase and outreach area.
When they first started out, they used songs like Nshakabwelele Inuma, Kamudoti, Motivator and Hell Session, to reach out to perform.
It is mostly hip-hop; but there is more, they can equally do poetry and dance.
This is what they started with when they first embarked on their mission which was mostly in church before going to public spaces.
Team Yesu did certainly make a mark when they performed at the 52nd Zambia International Trade Fair in Ndola and the Agricultural and Commercial Show in Lusaka early this year.
They have since been to engage inmates at Mukobeko Maximum Prison in Kabwe, Kamfinsa in Kitwe, Kansenshi in Ndola and Chondwe in Masaiti as part of their prison fellowship programmes.
And as part of the peace and unity concerts, the group has performed at Ndola College of Biomedical Sciences, Ndola Nursing School and the School of Medicine at Ndola Teaching Hospital. They have also been to Crossway School of Education in Ndola too.
It is a formidable ensemble.
Registered with the Registrar of Societies, their constitution promotes an open membership policy to any Christian regardless of denomination.
Some of the current members of Team Yesu are childhood friends while others met through singing.
Among them you find those with backgrounds in economics from University of Zambia and others with credentials in teaching, safety management, hospitality management, fisheries and pharmacy.
These include Taonga Chisambi, Precious Affia, Peter â€˜Rockyâ€™ Eshlon, Harrison Chilufya, aka Candy Rex, and Frederick Njamu, alias Van J.
Others are Joseph Lungu, also called â€˜TJâ€™, Iden Mkangala, also known as Chief Iden, Lusungu Chisambi as â€˜LCâ€™, Martin Kankonkanya, aka Wee-Neygar and team leader Mwansa Chama who together with â€˜Apostleâ€™ Paul Ngulube are music producers.